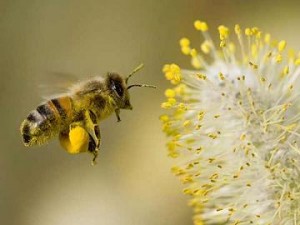 Are there GMOs in your honey?

In December the European Parliament is due to vote on an amendment to the Honey Directive that looks set to be the final stage of a battle that began in Bavaria, Germany, in 2005.

That was when amateur beekeeper Karl Heinz Bablok discovered that his honey was contaminated with pollen from a nearby trial site of Monsanto’s 810 GM maize, which was being grown by the Bavarian state.

In May 2008 an administrative court in Bavaria banned Herr Bablok from selling or giving away his honey, and ordered that it be incinerated. Beekeepers were told to move their hives away from GM sites during pollination to protect their products.

Bablok and some other local beekeepers filed a suit against the Bavarian State Government, which was represented by lawyers from Monsanto. And they did indeed move their hives, two months later, straight to the Bavarian capital of Munich. Supporters helped to set the bees up in ‘refugee camps’ throughout the city, notably in front of the Bavarian State Parliament Building and the Governor’s Office. They were offered ‘political asylum’ by Munich beekeepers as well as some members of the Bavarian Parliament. The creative protest was aired on Bavarian state television, and Bablok’s bees were propelled to fame in farming communities. Seeing the implications of its deeply unpopular alliance with Monsanto, the CSU made a dramatic about-turn and got on side with the beekeepers.

The case got referred to higher courts and in September 2011 it reached the European Court of Justice (ECJ) in Luxembourg. By this time, the CSU had banned Mon 810 in Bavaria. At the court hearing it filed a very simple brief stating that it agreed with arguments filed by the beekeepers. But Monsanto was also a party in the case, and continued to fight.

According to Walter Haefeker, President of the European Professional Beekeepers Association, the pivotal moment came when one of the judges asked the defendants’ lawyers how his wife would know if there were GMOs in a jar of honey she bought. The defence faltered and couldn’t answer the question.

“The court found a way to make sure that not just the wife of the judge but all consumers had the right to know that there are GMOs in the jar – the same as any other food,” says Haefeker.1

The ECJ ruled that honey and food supplements containing pollen derived from a genetically modified organism (GMO) are foodstuffs produced from GMOs and as such cannot be marketed without prior approval and authorisation as a food. Further, they ruled that pollen should be considered an ingredient of honey.

At the time it was anticipated that the ruling would pave the way for beekeepers to seek damages against organisations.

A grassroots movement against the political party responsible for growing the crop, the Christian Social Union in Bavaria (CSU), gathered momentum. People in Bavaria were not prepared to accept the fact that they could not eat their local honey, and the party suffered major losses in local elections, particularly responsible for the contamination of their products. But the implications were much further reaching than just that.

In 2011 Argentina supplied 19% of EU honey imports, second only to China.2 GMOs are planted extensively throughout Argentina, and everybody knows that European consumers are not at all keen on GMOs. A labelling requirement could have seriously hit imports from countries with high levels of GMO cultivation. Discussions were held at the World Trade Organization.

Furthermore, GM crops are grown not just for human food but also for animal feed, cloth, biofuels and pharmaceuticals. The ruling implied that it should be necessary to have the pollen from all GM crops approved for human consumption, including those which are not designed to be. Through bees, their pollen can enter the food chain.

European beekeepers waited for further guidance on how this ruling should be applied in practice. A year passed. According to a statement published by a number of European beekeeping associations, the European Commission asked Member States to wait before acting.3

The eventual response of the European Commission was a proposal that the Honey Directive be amended to define pollen as a constituent of honey, rather than an ingredient. According to Pete Riley from GM Freeze, if the vote is passed it would effectively take beekeepers out from any protection from GM contamination, and consumers would be left in the dark about the products they buy.4

A yes vote would mean that the GM material would only need to be 0.9% or more of the honey in order to trigger labelling laws, rather than 0.9% of the pollen. As pollen rarely makes up more than 0.5% of honey, this is highly unlikely to ever happen.

It was not legally possible for the Commission to overturn the ruling made by the European Court of Justice, which clearly and explicitly states that pollen should be considered an ingredient. Instead, the Commission is attempting to fiddle with a different piece of legislation that will render the ruling ineffectual.

In September 2013 the European Parliament published an impact assessment of the two possible options: either letting the ECJ ruling stand or changing the Honey Directive.

The fact that consumers would prefer not to buy products with a GMO label is noted. Therefore, in the event of GM pollen being labelled, it is claimed that: “beekeepers will relocate their hives to ensure sufficient distance from GM fields” to prevent contamination.

If beekeepers know the location of GM sites (which is not a given) the conclusion of this scenario could see all of Europe’s affected beekeepers load their hives onto the backs of trucks during the crucial pollination period and drive around looking for somewhere up to 10 kilometres away from any GM crops to do their beekeeping.

At the same time, the assessment concludes that: “the change in status of pollen in honey does not have direct significant economic, social or environmental impacts.”

If beekeepers remove their bees from an area it loses its most important pollinators. This could seriously hit farmers and their yields. But we don’t just need bees for food production: on a landscape level we need them for regeneration. There will be all sorts of things growing in an area, some we might eat, some we don’t. To take the bees away is not just about preventing GMOs from entering the food chain, it’s about stopping the natural cycle of life.

Walter Haefeker is convinced of the answer: the European Commission is doing all it can to ensure that co-existence measures with regard to bees are not going to happen in Europe.

The consequences for the biotech industry could be disastrous. Pete Riley agrees: “If you include beekeepers into the requirement of co-existence the regulatory framework becomes unworkable. That’s what’s behind the move to make pollen a constituent.”

But Walter has an ace up his sleeve.

Fresh from the 43rd Apimondia (international beekeeping congress) in Kiev, Ukraine, Haefeker is armed with his industry’s response to the proposed change in legislation. He sounds excited. Lots of European beekeepers have come out against it, he says, but the most significant ones are the Spanish.

GMOs are far more widely grown in Spain than in any other European country. According to the Commission they should be the ones to benefit from the change because they would not need to label their honey as containing GMOs or move their hives. But they’re rejecting it.

And it turns out others have not been idle since the ECJ verdict. In countries including Argentina, regional maps of honey production have been created, combined with analysis of suitable export regions. Systems have been implemented to keep track of honey that has a high contamination risk and that which reaches the market requirements of the EU.

“The representative of the largest honey exporter in Argentina even said that consumers have right to know,” reports Haefeker.

Furthermore, laboratories are already analysing honey according to the ECJ standards. The market has responded.

“It is no longer a high priority issue of exporting countries. The information that we’re going to be providing from Apimondia makes it clear that what the Commission is trying to do is unnecessary – it solves a problem that doesn’t exist”.

If you live in the EU and you want honey containing GM pollen to be labelled, write to your Member of European Parliament asking them to oppose the change in the Honey Directive. If you are not sure who your MP is, or how to contact him or her, you can find out at They Work For You website. You can also check the GM Freeze website for updates.

If you live outside the EU remember that the contamination and adulteration of honey is not just an EU problem. In US, for example, the vast majority of honey in the grocery stores is highly adulterated with either pollen from bees fed on GMO plants, or, worse it not honey at all but a cheap facsimile made from ingredients such as high-fructose corn (and therefore GMO) syrup with no nutritional value. Canadian honey is largely made by bees that are fed on GM canola as are honeys that come from other countries in the Americas.  Australian honey will also have some level of GM pollen in it.