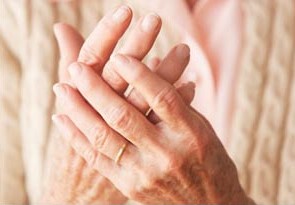 Although we think of arthritis as a single disease, it’s is actually an umbrella term for several different disorders. These include osteoarthritis (OA) – the gradual loss of cartilage and overgrowth of bone in the joints, especially the knees, hips, spine and fingertips.

Rheumatoid arthritis (RA) – a chronic inflammatory disease, in which the immune system attacks the joints and sometimes other parts of the body.

Rheumatoid arthritis, in fact, is one of medicine’s mysteries. There were no medical reports of the disease until the early 1800s. Some have suspected that a virus or bacterium may play a role, perhaps by setting off an autoimmune reaction. Genetics may also be a factor, in that it may influence susceptibility to the disease.

Most types of arthritis are treated with drugs that reduce inflammation or suppress the immune system. Surgery may also be recommended, if joint damage is severe. But neither of these options fully relieves symptoms.

Most types of arthritis share certain similar causes. While not all arthritis is preventable, there is much you can do to alter the course and severity of the disease.

Eliminate food sensitivities.  The link between food allergies and arthritis has been hard to prove scientifically. Most studies have focused on antibodies (proteins that attack and destroy foreign substances) in the blood. But more recent evidence suggests we may have been looking in the wrong place. Food-related antibodies may show up in the gut – rather than the blood – of people with RA, In 2006 Norwegian researchers found that, the intestinal fluid of people with RA had higher levels of antibodies to proteins from cow’s milk, cereal, hen’s eggs, codfish and pork than that of people without RA.

Foods that can worsen both RA and OA include red meat, sugar, fats, salt, caffeine, and nightshade plants (e.g. tomatoes, potatoes, peppers, eggplant). Gluten and milk proteins may also be triggers. If you are cutting out dairy and are worried about calcium make sure you include plenty of other calcium-rich foods in your diet such as tinned fish with bones e.g. salmon, sardines, pilchards; green leafy vegetables; and foods enriched or fortified with calcium such as tofu.

A Mediterranean diet, consisting primarily of fish, fruit, vegetables, cereals, beans and neutral fats such as olive oil, may be preventative and has been associated with as much as a 56% decrease in joint swelling, tenderness and pain and better movement and vitality. One reason may be that this largely plant-based diet is high in certain anti-inflammatory compounds such as essential fatty acids and enzymes, which have also shown benefit in heart disease and diabetes and obesity.

Good fats lubricate the joints. Healthy fats can have a beneficial effect.  Omega-3 fats have anti-inflammatory properties. Fish oils have been shown to reduce pain and other symptoms in rheumatoid arthritis but there is little evidence of their usefulness in osteoarthritis. Combining daily fish oil with olive oil seems to be particularly effective. Gamma linolenic acid (GLA), an anti inflammatory fatty acid found in borage, evening primrose, and black currant seed oils, can be effective at around 3g per day. In one study borage oil at 1.3 grams daily for three months reduced the symptoms of rheumatoid arthritis.

Lower meat intake. One reason arthritis is sometimes treated with vegetarian diets is that meat contains a specific fatty acid (arachidonic acid) that is believed to promote inflammation in the body. Vegetarian diets reduce your intake; vegan diets eliminate it almost completely. A gluten-free vegan dietary regimen can lead to up to a 40 per cent improvement in symptoms according to one study

Fasting. Researchers have found that fasting and vegetarian an diets are beneficial for those with rheumatoid arthritis.  Fasting can also be used to help identify food allergies and sensitivities that lead to arthritis.

Regular moderate exercise is essential for keeping your joints from deteriorating. Activities that do not put stress on joints, but that strengthen surrounding bones, muscles and ligaments, are valuable for many types of arthritis and may also be preventative. Good choices include bicycling, walking and swimming, even various forms of dance, but avoid weight-bearing or impact exercises.

Body/mind exercises are also really beneficial so if you haven’t already try yoga, tai chi and qi gong. Yoga in particular has been well studies and found to improve pain, joint health and physical functioning, but also mental/emotional well-being. Even for those who find it difficult to stand a form of ‘chair yoga’ has been found to bring improvement.

Avoid injuries – start young. Serious injuries to joints – torn ligaments, torn cartilage, or broken bones – can lead to arthritis later in life. For example, people who injure their knees as teenagers and young adults are nearly three times more likely than those without injuries to have osteoarthritis by the time they reached 65.

Target coeliac disease. In addition to being a cause of intestinal symptoms such as chronic diarrhoea, abdominal pain or constipation, coeliac disease may be a contributing factor in some cases of unexplained osteoporosis, arthritis, anaemia, or infertility.

Ditch those implants.  The recent PIP scandal has left many women with concerns about breast implants. Many women reported pain and other disturbing symptoms with these faulty implants. This was not the first time that silicone gel breast implants and other silicone prostheses have been implicated in arthritis-like symptoms, such as swelling of joints, pain, fever and chronic fatigue. The problem appears t be that they promote antibodies to collagen which then attach susceptible tissues. Some, but not all, women have seen arthritic symptoms disappear after having the implants removed.

Try glucosamine. Many double-blind trials have shown that glucosamine sulphate reduces symptoms of osteoarthritis and some experts believe that it can also prevent it in those at risk. Although some have expressed fears about long-term supplementation, one trial showed that over three years of supplementation (1500mg daily) blood sugar levels were not affected and participants experienced almost no side effects.

Getting optimum levels of several nutriments should also be a part of your prevention program. The most important of these are:

Antioxidant vitamins C and E Vitamin C has been shown to prevents cartilage damage and can reduce the risk of osteoarthritis three-fold. Consider 1-3g daily. Taking 1200 to 1800 IU per day of vitamin E can significantly decrease joint pain. As E is an antioxidant it may also help prevent joint damage.

Vitamin D Deficiency in this important nutrient is highly prevalent in patients with RA, and may be linked to increased severity of symptoms in sufferers. People with inflammatory arthritis and chronic pain/fibromyalgia may also be chronically low in Vitamin D. Daily doses 50mcg (2000 IU) are considered safe.

Other potentially helpful nutrients include:

Vitamin B3 (niacinamide) helps maintain supple joints and has been used successfully as a treatment for osteoarthritis in doses of 250-500mg daily.

SAMe, S-adenosyl methionine is anti-inflammatory and pain-relieving, and may possess tissue-healing properties that help protect the health of joints. Suggested intake is1200mg daily.

Alternative remedies also have a great deal to offer those suffering from arthritis. In fact research from the US shows that joint pain and arthritis are among the top five most common reasons that people seek our complementary therapies. Though given how widely spread the problem of arthritis is becoming, it is amazing how narrow the field of study is in alternatives. There is very little, for instance, on the efficacy of homoeopathy, though constitutional treatment may be of benefit.

Acupuncture has a good track record in relieving pain. A recent study found that it was a valuable alternative to surgery for those with osteoarthritis in the knee.

Frankincense. Scientists are beginning to study the anti-inflammatory effects of this precious resin and oral supplementation has been found to bring significant improvements in pain and joint function. Massage with frankincense oil (indeed any warming oil or salve) may have similar pain relieving properties.