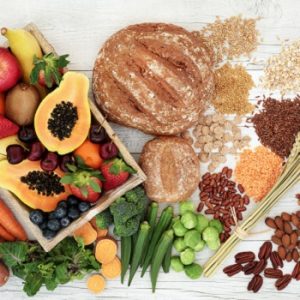 The key to weight loss is getting plenty of good quality fresh fruits and vegetables and whole foods in your daily diet. [Photo: Bigstock]

Counting calories can be a drag, and increasingly studies are showing that while how much you eat is influential – it isn’t always the be-all and end-all of weight loss. Indeed according to new data, the quality of the food you eat may be what really holds the key shedding the pounds.

Recently researchers from Stanford University School of Medicine took 609 men and women aged 18 to 50 and randomly split into two dietary groups – low carbohydrate or low fat – and followed them for a year.

Overall those who ate plenty of vegetables and whole foods lost significant amounts of weight over that time without restricting the quantity of food that they consumed. The low-carb participants lost an average of 13 pounds, while the low-fat group lost an average of 11.7 pounds. Essentially, both diets worked equally well and both groups also saw improvement in other health factors such as blood pressure and body fat.

That may not be what those who love the polarized low-fat versus low-carb debate would like to hear, but it’s a win for those who prioritise the bigger picture of nutrition.

» Researchers trying to figure out if a low-carbohydrate or low-fat diet was best for weight loss were surprised to find they both worked equally well.

» Including more fresh foods in the diet meant that participants ended up eating less naturally without counting calories.

Interestingly those results weren’t necessarily what the researchers were looking for when they started.

The original goal of the study, which is published in JAMA, was to compare how overweight and obese people handled each type of diet, but both groups were also encouraged to prioritise better quality food over processed options.

The researchers were also looking at genetics and insulin, seeking to discover if these nuances of biology would encourage an individual’s body to favour a low-carbohydrate diet or a low-fat diet. In fact, results showed no link between a person’s individual genetic make-up – or their insulin secretion level – and how much weight they lost.

It’s not that calories don’t matter, say the scientists. Participants in both groups were eating less by the end of the study. It’s more that calories shouldn’t be the main focus when it comes to weight loss.

What’s key, said Christopher Gardner, PhD, professor of medicine and the lead author of the study, was emphasising that these were healthy low-fat and low-carb diets: A soda might be low-fat, but it’s certainly not healthy. Lard may be low-carb, but an avocado would be healthier.

“We made sure to tell everybody, regardless of which diet they were on, to go to the farmer’s market, and don’t buy processed convenience food crap. Also, we advised them to diet in a way that didn’t make them feel hungry or deprived – otherwise it’s hard to maintain the diet in the long run,” he said.

“We wanted them to choose a low-fat or low-carb diet plan that they could potentially follow forever, rather than a diet that they’d drop when the study ended.”

“We’ve all heard stories of a friend who went on one diet – it worked great – and then another friend tried the same diet, and it didn’t work at all,” said Gardner. “It’s because we’re all very different, and we’re just starting to understand the reasons for this diversity. Maybe we shouldn’t be asking what’s the best diet, but what’s the best diet for whom?”

Perhaps the biggest takeaway from this study, Gardner said, is that the fundamental strategy for losing weight with either a low-fat or a low-carb approach is similar. Eat less sugar, less refined flour and as many vegetables as possible. Go for whole foods, whether that is a wheatberry salad or grass-fed beef.

“On both sides, we heard from people who had lost the most weight that we had helped them change their relationship to food, and that now they were more thoughtful about how they ate,” said Gardner.

The key to weight loss is getting plenty of good quality fresh fruits and vegetables and whole foods in your daily diet. [Photo: Bigstock]