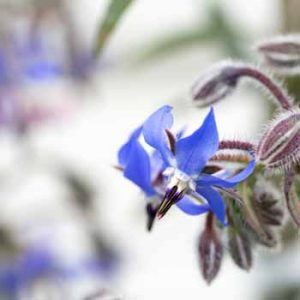 The leaves and flowers of the borage plant can be eaten or used medicinally and the seeds yield a healing oil. [Photo: Bigstock]

Borage for health – and courage!

Borage, also known as starflower, is a native annual plant in the Mediterranean region that has been used since ancient times for culinary and medicinal purposes.

Traditional uses of borage (Borago officinalis) include the treatment of swelling and inflammation, respiratory complaints, fever and even melancholy – ‘borage for courage’ is the rough translation of the old Latin verse “Ego borago gaudia semper ago”.

Until recently the whole plant was used. The leaves, which have a taste reminiscent of cucumber, and flowers, for instance are edible and borage is common in Germany, as an ingredient in green sauce, made in Frankfurt, in Crete and in the Italian region of Liguria, to fill traditional ravioli pasta. Vegetable borage is also very popular in the cuisine of the Spanish regions of Aragon and Navarra where it is boiled and sautéed with garlic, served with potatoes. In Britain borage leaves are a popular addition to summer cocktails.

For most of us, however, it is the oil, cold-pressed from the seeds and sold as starflower oil, which we are most familiar with.

» Borage, also known as starflower, is a traditional herbal remedy. The leaves and flowers can be eaten or used medicinally and the seeds yield a healing oil.

» The seed oil, in particular, is well studied and has been shown to be beneficial for joint pains, dry skin conditions and weight management.

» The leaves and flowers can also be used to make infusions that soothe sore throats and coughs and ease itchy skin conditions.

There are many modern claims for the medicinal properties of the oil when taken internally including diuretic and laxative properties, to assist in weight management and relieve the pain of menstrual cramps and PMT. Externally it is also a good emollient, and many natural toiletries and cosmetics make use of this property.

So what does the research say about the benefits of incorporating borage (starflower) oil into your daily routine?

There is good and consistent evidence that taking borage oil can bring about improvements for rheumatoid arthritis (RA) patients. In the body gamma linolenic acid (GLA) converts to a hormone-like substance called prostaglandin E1 (PGE1), the anti-inflammatory properties of which can help reduce joint pain, inflammation, stiffness and swelling associated with this disorder. One study found that GLA-rich  oils such as borage could provide symptom relief and possibly reduce the need for painkillers. for people with RA.

There is also evidence that taking borage seed oil, in combination with conventional analgesics or anti-inflammatory agents, might help decrease symptoms of RA after 6 weeks of treatment. Borage seed oil was shown to decrease the number of tender joints by 36% and the number of swollen joints by 28%,

In studies, doses range from 1.1-2.8 grams per day of borage oil and improvement can often take a few months to kick in but can be long lasting. In the 6 week study above, the improvement was sustained for up to 24 weeks.

In one study, supplementing with borage oil helped keep the pounds off of overweight people who had previously lost weight. Supplementation with 5 g of borage oil per day (providing 890 mg per day of GLA) significantly reduced the average amount of weight regained over the next 12 months – 4.8 lb versus 19.3 lb (2 kg versus 8.5 kg) in the placebo group.

It is thought the borage oil worked by correcting certain abnormalities of essential fatty acid metabolism that are common in people predisposed to obesity.

Although clinical research so far is mixed, there are encouraging studies for milder, common skin issues. For example, a 2009 study reported good results using borage oil supplementation to treat skin dryness and irritation. Some studies have also shown the effectiveness of borage oil on atopic dermatitis or eczema with reduction in itching, dryness and skin inflammation.

Topical borage oil is particularly gentle and effective for babies who have cradle cap (a form of seborrheic dermatitis). One group of researchers found that infants with cradle cap appeared to have an imbalance of essential fatty acids in their blood that returned to normal when their skin rashes eventually went away.

In a preliminary trial, these researchers later found that application of 0.5 ml of borage oil twice daily to the affected skin resulted in clinical improvement of cradle cap within two weeks.

Borage oil may also reduce some of the breast tenderness and other PMS symptoms that women can feel before their periods. Many PMS sufferers are found to have unusually low levels of GLA in their systems, often because their diets are less than optimal, which is why supplements can help. The anti-inflammatory effects of PGE-1 which the body synthesises from GLA may help calm things down. Anecdotal evidence suggests his can also be helpful in relieving menstrual cramping.

And some more serious conditions

There is some evidence of benefit for patients with cystic fibrosis, a genetic disorder that causes severe breathing problems. According to one study patients taking 1500 milligrams borage oil daily for four weeks experienced improvements in vital capacity – the amount of air a person can expel from the lungs after a full inspiration.

Most recently a laboratory study has shown that rosmarinic acid, an aromatic constituent of borage, can protect DNA against damage and possesses anti-cancer effects which could make it a useful addition to cancer prevention and treatment. This protective effect on DNA has been demonstrated in other studies.

For ageing or environmentally damaged skin borage oil has regenerative properties that soothe, hydrate, heal and boost the elasticity of the skin. Rubbed into ails and cuticles it can help maintain good nail health.

The skin benefits of borage oil are similar whether you choose to take it internally or apply it to your skin topically.

If you are blending it into skin preparations you don’t need to use much to feel the benefits. In oil blends and serums borage is only used at around 2-10% of the total mixture. Since borage oil doesn’t keep well using the oil from capsules rather than open bottles in home-made cosmetics makes good sense.

With all the focus on the seed oil it’s easy to forget that borage is also a useful herb.

In Iran, for example, people make a tea from borage to relieve colds, flu, bronchitis, rheumatoid arthritis, and kidney inflammation.

Borage leaves and flowers contain potentially toxic substances (pyrrolizidine alkaloids, or PAs) which could, in theory, cause harm if ingested over long enough periods of time (Borage seed oil may also contain minute amounts of PAs, though this is usually removed by processing). PAs are present in thousands of different plants including comfrey and ragwort.

Adverse reactions to the PAs in borage are not well documented – we couldn’t find any specific case studies in the research – but many herbalists caution not using the herb in high amounts, or over long periods of time and to avoid giving the herbal preparation to babies and young children. Buying from a reputable supplier is a must.

If you have a cold an infusion made from the flowers and leaves can be sweetened with honey if you prefer and drunk throughout the day. It makes a good decongestant and soothing expectorant helping to relieve colds, catarrh, coughs and bronchitis.

If you have itchy skin you can also use a tea made from borage to bathe itchy skin. Or try taking it as a tincture to support your adrenal glands in times of stress.

The leaves and flowers of the borage plant can be eaten or used medicinally and the seeds yield a healing oil. [Photo: Bigstock]