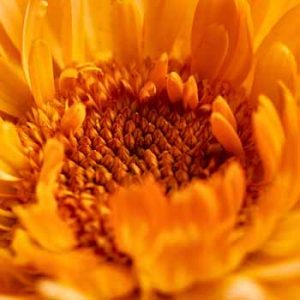 High in antioxidants, calendula is celebrated for its ability to quickly soothe irritated skin and repair skin tissue. [Photo: Bigstock]

Cultivated by the Egyptians, Greeks, Hindus and Arabs, Calendula officinalis, has been grown and used medicinally since the 12th century.

Although it is a native to central Europe and the Mediterranean, this cheerful orange member of the daisy family grows readily in sunny locations throughout North America and Europe.

Because the flowers follow the sun, calendula was traditionally linked to the astrological sign of summer, Leo, and to treating the heart and conditions caused by heat. But its modern uses extend well beyond this.

The flowers are the part of the calendula plant that is used medicinally, either in the form of infusions, tinctures, liquid extracts, creams or ointments, or as an active ingredient in skin products such as face lotions, sun protection products and skin care preparations for babies and hair products.

Calendula’s popularity in skin care products – especially for sensitive and dry skin – is due to its ability to quickly soothe irritated skin and repair skin tissue. It can be used as an infusion, tincture (extraction in alcohol and water) or macerated oil (extraction in sunflower oil).

Some herbalists combine calendula, comfrey, echinacea and St. John’s wort in a cream or ointment as an all-purpose skin salve; Hypercal cream which is a staple of most natural first aid kits is a mixture of hypericum (St John’s wort) and calendula.

A few interesting facts about calendula are:

Its high antioxidant content combines with potent natural resins and volatile oils are thought to be responsible for Marigold with its’ powerful anti-inflammatory and antimicrobial action.

Calendula tinctures, ointments, and washes are often applied to the skin to help burns, bruises, and cuts heal faster, and to fight the minor infections they cause. Calendula cream is also used to treat haemorrhoids and the dried herb can be taken as a tea to aid menstrual difficulties such as irregular or painful periods.

Most of what we know about calendula’s healing properties comes from laboratory studies; trials involving large groups of humans are not very common. Nevertheless existing research supports many of the traditional uses of calendula.

Ear drops containing calendula can be used to treat ear infections and are an especially gentle way of easing otits media in children. Some human studies suggest that calendula may possess pain relieving properties equal to those of conventional non-herbal preparations. In one study ear drops that included calendula, along with other herbs, were as effective as anaesthetic ear drops in reducing the pain of childhood earache.

In one 2004 study calendula cream performed better than the pharmaceutical preparation trolamine, a topical analgesic with sunscreening properties, in preventing dermatitis in women undergoing irradiation treatment for breast cancer

Another randomised controlled trial demonstrated positive effects of calendula ointment on healing leg ulcers and encouraging new skin growth. The total surface of all the ulcers decreased by 41.7% compared with 14.5% in the placebo group. In seven patients who applied the ointment containing marigold extract (twice a day for 3 weeks), the ulcers completely healed. compared to only 4 in the control group who washed the ulcers  in a saline solutions for 3 weeks.

In a double-blind placebo controlled trial, a preparation made from a variant of calendula, Tagetes patula (French marigold), combined with a protective dressing, effectively reduced the width of the lesion and level of pain of bunions.

Calendula extract toothpaste has also be recommended as an adjunctive procedure effective for the improvement of gingival inflammation. Brushing with calendula toothpaste led to significant reductions in plaque, gingivitis and bleeding gums in a prospective, double-blind clinical study of 40 volunteers with established gingivitis.

High in antioxidants, calendula is celebrated for its ability to quickly soothe irritated skin and repair skin tissue. [Photo: Bigstock]