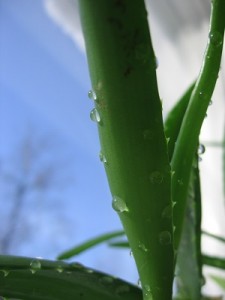 Gel from the aloe plant can be used both internally and externally to treat a wide range of conditions [Image: EmmiP - Morguefile]

Aloe vera – turning down the heat

If legend is any guide, aloe must be a king among plants…

Aristotle persuaded Alexander the Great to conquer the Isle of Socroto to secure enough aloe vera to heal his soldiers wounds; Cleopatra relied on it to maintain her youthful complexion and the Chinese hailed it as an elixir of youth and it is even listed in St. John’s gospel as an anointing ingredient for the body of Christ.

The name aloe comes from the Arabic for “shiny and bitter”.Historically, the plant has been used topically to heal wounds and for various skin conditions, and orally as a laxative.

Today, in addition to these uses, aloe is used in a variety of conditions, including diabetes, asthma, epilepsy and osteoarthritis. It is also used topically for burns, sunburns, and psoriasis. Aloe vera gel can be found in hundreds of skin products, including lotions, sunblocks and after sun treatments.

Aloe vera’s place in modern history began in the 1930s when it was reputed to help heal radiation burns caused by x-rays. It was also used on victims of the atomic bombs dropped on Nagasaki and Hiroshima.

Its first commercial use was in the production of a latex substance called aloin, a yellow sap used for many years as a laxative ingredient. Because the name aloin became synonymous with aloe for a while there was confusion when aloe vera gel came on the market.

Aloe gel which is used mostly externally for bites, burns and skin conditions is derived either from the inner flesh of the leaves. It can also be made from the thickened juice. Fresh aloe gel can be diluted into a juice and taken internally as a laxative, as a mouthwash and toothpaste ingredient, to treat gut problems and joint and muscle pain.

Whole leaf aloe juice (and a dried substance known as latex) is pressed from the whole leaf and generally needs to be filtered before it can be used. Although this filtering process removes the parts of the outer skin that are toxic and highly purgative, it also removes nutritious parts of the plant as well. For this reason many practitioners using the gel and juice made from the gel instead using whole leaf juice.

There are over 200 different species of aloe vera, grown mainly in dry climates of the US, Mexico, India, South America, Africa, Central America and the Caribbean. Out of these 200 plus species only four are recognised as being of any nutritional value to humans and animals. Only the mature (3-5 years old) plants of the Aloe Barbadensis Miller and the Aloe Aborescense are grown commercially, with A. Barbadensis Miller being the preferred plant.

There are around 75 different compounds which naturally occur in aloe – depending on what kind of soil it is grown in and the process by which it is prepared. Typically it is high in calcium potassium and magnesium with significant amounts of sodium and amino acids as well.

It also contains vitamins A and C as well as vitamins B1, B6, B12. The gel can be rendered useless if exposed to oxygen for four hours or more and a non-chemical, non-heating method of processing is best since both can destroy health-enhancing enzymes.

What the research says

Today belief in the efficacy of aloe is so widespread that it is being sold as a kind of cure all for a wide range of other health problems. But while it has some curative properties and assists healing, on its own it has never been proven to actually “cure” anything.

Aloe is often referred to as the “burn plant” because of the remarkable way it can heal a wide variety of burns to the skin.  Indeed healing minor burns, wounds and grazes is where the weight of evidence for the healing properties of aloe vera lies.

Aloe vera can help to soften skin around wounds and prevent dryness as they heal. Some evidence suggests it is at least as effective as a 1% silver sulphadiazine solution – and as such some may prefer to use more natural aloe gel to aid wound healing. There is some evidence, however, to suggest aloe gel inhibits healing of deep surgical wounds such as those produced during laparotomy and caesarean section.

It may also aid healing more serious conditions. In one evidence review aloe shortened the healing time for first and second degree burns compared to standard treatments such as silver sulphadiazine solution or petroleum jelly-impregnated gauze. Both the aloe and the conventional treatments were found to be capable of producing some skin irritation.

Some cancer patients use aloe to prevent radiation induced burns. Though there is currently no strong evidence to suggest that topical aloe vera can prevent or minimise skin reactions due to radiotherapy.

Aloe has been shown to be an effective treatment for psoriasis though the effect is not strong.  It may also be helpful in treating lichen planus – chronic skin condition characterized by itchy, flat, scaly patches.

There is laboratory evidence that aloe vera may help ease ulcerative colitis (UC) due to its antioxidant properties. A small human trial found that that a solution made from aloe vera gel 100 mL twice daily for 4 weeks, worked better than placebo for healing ulcerative colitis. In an animal study an antioxidant preparation containing aloe and ubiquinol (a form of CoQ10) were found to be protective against induced colitis (but had no healing effect once the UC was established.

Two small studies suggest that that aloe gel taken might be helpful for type-2 diabetes. In one results showed significantly greater improvements in blood sugar levels among those given aloe over the 2-week treatment period.

Aloe’s use to treat cancer is controversial, though there have been some hopeful studies.

Researchers noted that patients taking the aloe vera had a better quality of life and that they had fewer chemotherapy side effects such as numb fingers and fatigue. Nevertheless these were very sick people and the addition of aloe to their treatment appeared to be beneficial. In addition there were no ill effects from the aloe vera and more patients who had the aloe vera survived for 3 years than patients who just had chemotherapy.

Much more research is needed and it is always wise to consult your healthcare practitioner about the use of aloe.

As a rule of thumb:

With aloe you get what you pay for. According to the US Food and Drug Administration you can have a mere two tablespoons of aloe vera to a gallon of water and it can still be labelled 100% aloe vera juice.

So as a consumer looking to take aloe you need to start reading labels. Aloe is unlikely to be effective in concentrations of less than 70% and you should really be looking for a product that is a minimum of 95% aloe.

Gel from the aloe plant can be used both internally and externally to treat a wide range of conditions [Image: EmmiP - Morguefile]