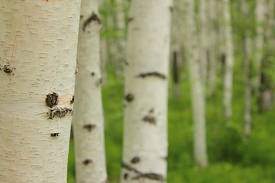 Natural Health News — Extracts from the birch tree have served for centuries as a traditional remedy to help wounds to heal more quickly.

Now German researchers have made inroads into understanding just how an extract from the outer white layer of the tree’s bark works to heal wounds.

Their findings are published in the journal Plos One.

The mechanism is complex and takes place at the molecular level. In the first phase of wound healing, the damaged skin cells release certain substances that lead to a temporary inflammation. They attract phagocytes, which remove foreign bacteria and dead tissue.

In this phase, extract of birch bark (Betula alba, syn. B. pendula, Betulaceae family) increases the injured skin’s ability to produce certain types of protein called “inflammatory substances,” which attract the kinds of cells which remove bacteria and dead tissue. Then, the birch (specifically the betulin and lupeol proteins in the bark) causes skin cells called keratinocytes to move into the injury, helping heal and close the wound faster.

In the second phase of wound healing the skin cells migrate and close the wound. The birch (specifically the betulin and lupeol proteins in the bark) causes skin cells called keratinocytes to move into the injury, helping heal and close the wound faster. Birch extract aids in this process as well, they found.

Herbal remedies to help with wound healing have been gaining wider appeal than ever before due to more reports than ever about dangerous side effects associated with many drug treatments.

The authors of the current study note that birch bark was used by the North American Indians who wrapped their wounds with it to accelerate wound healing. Their findings support earlier laboratory data showing a beneficial effect on both cell proliferation and cell migration.

In traditional medicine, particularly in Russia, most parts of the birch tree are used.

Infusions of birch leaves is said to be an excellent tonic for a variety of inflammatory problems related to the bladder and kidneys. Birch leaf infusions are also recommended for promoting the flow of bile, which is used to digest fats. Infusions of birch buds are said to aid detox via a strong diuretic action.

Birch sap is considered a general tonic for the whole body and has many traditional uses. It is believe to strengthen the immune system and enhance the body’s ability to resist disease. The sap is also used as a wash to improve skin texture and relive skin problems such as eczema and acne. It has also been used to remove dandruff and increase hair growth.

Applied to rheumatic or arthritis joints, a compress made from mashed and steamed fresh birch leaves is said to relieve pain and reduce inflammation.