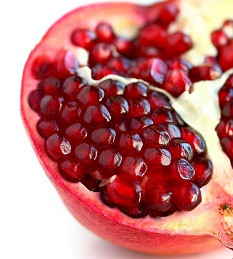 Pomegranates have amazing anti-inflammatory, anti-oxidant and even anti-bacterial properties

Pomegranate – powerful protection inside and out

Bitter, sweet, astringent, the distinctive ruby-red jewel-like seeds of the pomegranate add colour and flavour to all kinds of dishes.

Pomegranate seeds have been used for medicinal purposes for thousands of years and today it is claimed that the juice pressed from the seeds is effective against heart disease, high blood pressure, inflammation and some cancers, including prostate cancer.

The oil extracted from the seeds has become popular as cosmetic ingredients as well, promising anti-ageing, moisturising and skin protective effects.

The question is, how well does the evidence stack up against such claims?

The fruit of paradise

Pomegranates (Punica granatum), grow on shrub-like trees which thought to have originated in Iran. Today the fruits are widely grown through the Mediterranean and in Southern Europe, northern Africa, Southeast Asia, and the Middle East. They are also now grown in parts of California and Arizona.

The name for pomegranate in both Arabic (rumman) and Hebrew (rimmon) means “fruit of paradise”. Since ancient times the fruit has been linked with abundance, blessings, fertility, immortality, invincibility, posterity, prosperity, and the endurance of marriage. While its multitude of seeds might explain why pomegranate is linked with fertility,

The seeds are an excellent source of dietary fibre and also provide around 12% of the recommended daily intake for vitamin C and 16% vitamin K per 100 g serving.

They are also full of antioxidant compounds, particularly:

Most parts of the pomegranate – including the flower, fruit rind, leaf, dried seed and fresh seed, root bark or trunk bark, fresh fruit and juice – have been utilised medicinally in almost every traditional medicine system.

Pomegranate is mentioned as a remedy for roundworm in the Ebers Papyrus (the oldest preserved medical document, from Egypt, ca. 1500 BCE).

Hippocrates used pomegranate seed extracts for numerous ailments including skin and eye inflammation and as a digestive aid, while Dioscorides recommended various pomegranate parts, sometimes in combination with other ingredients, for stomach ailments, mouth and genital sores, gum disorders and loose teeth, as well as for expelling parasites.

Treatment of bronchitis, diabetes, diarrhoea, haemorrhaging, leprosy, and snakebites are all traditional uses of pomegranate.  Both the dried fruit rind and pulp, tsken as teas or tinctures, have been used to treat upset stomachs and diarrhoea,

A number of small studies have looked at the benefits of pomegranate juice in relation to heart health.

One study showed that in people with narrowed arteries, a daily glass of 50ml (approx 2 oz) of pomegranate juice over a period of three years, helped to cut cholesterol build-up and reduce the damage cause by the oxidation of cholesterol in the artery.

In another trial the same daily amount of pomegranate juice was shown to help lower systolic blood pressure by about 5% and decrease the activity of a substance called angiotensin converting enzyme (ACE), a cause of hypertension.

In another involving people with coronary heart a daily drink of 238 ml (approx 8 oz) of pomegranate juice taken over three months resulted in improved blood flow to the heart and a lower risk of heart attack.

In 2012, a randomised, placebo-controlled, parallel group study examined the effect of pomegranate juice on pulse wave velocity (PWV), a measure of arterial stiffness that is a predictor of future cardiovascular events. Researchers found that 330 ml (approx 11 oz) per day of pomegranate juice helped reduce both systolic and diastolic blood pressure, but did not reduce PWV.

In diabetics 50 ml of juice daily was shown to reduce markers for inflammation and oxidative stress.

The fruit extract also has anti-microbial effects and has been found to be effective against antibiotic resistant Staphylococcus aureus strains.

The juice has anti-viral properties that have even been shown to be effective against HIV-1. Pomegranate extracts have also been shown to have antibacterial effects against dental plaque.

Laboratory studies suggest that ellagitannins extracted from the fruit rind of P. granatum may be helpful against malaria.

Pomegranate supplement have been shown to increase the antioxidant levels in the blood by as much as 32%.

In 2013 one study found that capsules of pomegranate extract containing antioxidants equivalent to around 8 ox of pomegranate juice, helped slow the build of up prostate specific antigen – a marker for prostate cancer.

Likewise an animal study in 20132 found that adding a whole-fruit pomegranate supplement, delivering 200mg doses of punicalagins daily to the pigs’ diet for 10 days could improve metabolism and in some other ways negate the effects of a poor diet.

Great for your skin

Pomegranate oil is rich and deeply moisturizing and as it has become more popular as a cosmetic ingredient, studies are proving some of its benefits.

A 2006 study published in the Journal of Ethnopharmacology,  found that pomegranate oil stimulates “keratinocytes,” which are the major cells found in the epidermis, the outer layer of the skin. Helping to regenerate these cells may actually help reverse past damage to revive skin and reveal a newer and more youthful appearance.

By fending off damaging free radicals, the oil can help fight premature skin ageing and may even have a role to play in protecting against skin cancer. One 2003 study published in the Journal of Medicinal Food found that pomegranate seed oil significantly decreased the incidence of skin cancer in mice exposed to cancer-causing chemicals.

Another laboratory study found that the juice, the concentrated fruit extract and the oil were all photoprotective, suggesting they may be useful in protecting against UVB-induced damage to human skin.

Pomegranate rind extract has been used in traditional medicine to treat burns, skin ulcer and haemorrhages. A 2013 study found the extract has a strong anti-inflammatory action – even stronger than ellegic acid alone. The authors concluded it was a “promising phytomedicine that could find use in the treatment of inflammatory diseases.”

What all this means is that whether you are looking to create health and beauty from the inside out or the outside in, it seems pomegranate has something to offer.

Pomegranates have amazing anti-inflammatory, anti-oxidant and even anti-bacterial properties