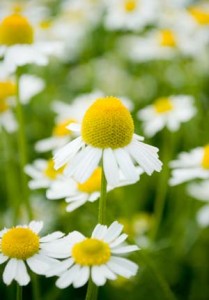 Chamomile has become such a popular remedy, particulary as a tea, that we risk taking it for granted

Chamomile has been used for centuries for the treatment of digestive upsets, skin problems and to promote a sense of balance and tranquillity.

It was an important herb in ancient Egyptian, Greek, and Roman medicines and the English word ‘Chamomile’ comes from the Greek ‘chamomaela’ or ‘ground apple.’ Roman nobleman and early scientist Pliny described the plant as having the aroma of  “apples or quinces”.

Over the centuries chamomile’s popularity and availability has grown to such an extent that today it has become ubiquitous. You can now buy chamomile tea in just about every supermarket – and as a result we sometimes take its healing potential for granted, opting instead for the latest exotic herb from some far flung mountaintop.

And yet, chamomile’s traditional uses are broad and include as an anti-inflammatory, antipeptic, antispasmodic, mild astringent and antibacterial and as a medicine for the mind, bringing a sense of peace to anxious adults and fractious children alike.

Applied externally, it is recommended in the treatment of  nappy rash, cracked nipples, chicken pox and eye infections such as conjunctivitis. It can also be used as a mouthwash or gargle to relieve mouth and gum infections.

Many of these traditional uses have been validated in recent years by scientific studies, showing that taken internally as a tea or tincture or applied externally as an oil or ointment chamomile has a multitude of uses.

German and Roman – what’s the difference?

Chamomile is a member of the daisy family (Asteraceae or Compositae) and there are two main types used in the herbalist’s pharmacopeia; German Chamomile (Chamomilla recutita) and Roman Chamomile (Chamaemelum nobile or Anthemis nobilis).

The names have nothing to do with where the plants come from; indeed chamomile is grown almost everywhere. It is a native to western Europe, India, and western Asia and has become naturalised in the United States.

Both types have a similar soothing and relaxing effect, and share a nearly identical range of therapeutic usefulness, but German chamomile is by far the more popular remedy.

This may simply be because German chamomile has received much more research attention and has long been regarded by herbalists as a more potent medicine of the two. That said, the milder Roman chamomile is considered particularly suitable for children.

The oils are produced by steam distillation of the leaves and flowers. This process produces an oil which, in the case of German chamomile, ranges in colour from brilliant blue to deep green when fresh but which turns to dark yellow after storage.

The blue/green colour is produced by a substance called chamazulene – also found in wormwood (Artemisia absinthium), and yarrow (Achillea millefolium). Fading does not cause the oil to lose its potency. Roman chamomile which contains much less chamazulene is generally much paler in colour.

Chamazulene, along with bisabolol and various antioxidant flavanoids (apigenin, luteolin, patuletin, and quercetin) and coumarins (herniarin and umbelliferone) are considered to be the major bio-active ingredients. Among the flavonoids found in chamomile, apigenin is the most promising in terms of medicinal benefits.

One human trial found that  German chamomile had a positive effect greater than that from a placebo in people with generalised anxiety disorder. In this study people took 220mg capsules to a maximum dose of 5 capsules a day as needed or placebo for 8 weeks.

The sedative effects of may be due in part to apigenin which has been shown to bind to benzodiazepine receptors in the brain. In animal studies, chamomile extracts have exhibited benzodiazepine-like hypnotic activity. Apigenin has also been shown to have anti-cancer properties.

Chamomile tea is frequently used as a mild sedative to calm nerves and reduce anxiety, to treat hysteria, nightmares, insomnia and other sleep problems. It has been shown to reduce blood pressure and act like a diuretic, making it a good choice if you have high blood pressure.

Human studies show it may also have benefits in cases of chronic insomnia and have anti-depressant effects. In a small study 10 ten cardiac patients were reported to have fallen immediately into a deep sleep lasting for 90 minutes after drinking chamomile tea.

Essential oils of chamomile are used extensively in cosmetics and aromatherapy.

A study in human volunteers demonstrated that chamomile flavonoids and essential oils penetrate below the skin surface into the deeper skin layers. This is important for its use as a topical anti- inflammatory as well as in beauty preparations.

Roman chamomile in particular is widely used in cosmetic preparations and has a soothing and softening effect on the skin. Both types are a popular addition to massage oils where they have been shown to help improve physical and psychological symptoms and general wellbeing.

Chamomile is particularly good for sensitive skins and helps to heal scratches and treat wounds, where it has been shown to promote faster healing than corticosteroids. It may also be useful in treating eczema where it has been found to be as effective as hydrocortisone.

Tea made from flowers and leaves of German chamomile was shown to produce increased urinary levels of hippurate in the urine in one study. Hippurate is a breakdown product of antioxidant phenolic compounds, some of which are associated with antibacterial activity.

This could explain why chamomile tea has long been associated with improved immunity and the ability to help fight infections.

In the same study, the tea was also associated with an increase in urinary levels of glycine, an amino acid known to relieve muscle spasms, suggesting say the researchers, a possible mechanism for chamomile’s benefits in menstrual cramps. Glycine is also a sedative.

Chamazulene, bisabolol, various flavonoids  found in chamomile have also been shown to have antifungal properties, including against Candida albicans.

Chamomile has been valued as a digestive relaxant and has been used to treat various gastrointestinal disturbances including flatulence, indigestion, diarrhoea, anorexia, motion sickness, nausea and vomiting. Along with orange flower and ginger, chamomile oil has also been shown to inhibit Helicobacter pylori – the bacterium associated with stomach ulcers.

In animal studies, both chamomile flowers and bisabolol have been found to inhibit stomach ulcers caused by stressful stimuli, such as alcohol and the NSAID indomethacin. In addition, healing times for ulcers induced by chemical stress or heat have been reduced by bisabolol. Extracts of the flowers of German chamomile have also been shown to have an inhibitory effect on gastric acid secretion, thus the herb’s use in soothing upset stomachs.

Chamomile has also been shown to be useful in preventing inflammation of the gastrointestinal tract (mucosis) – a common side effect of cancer treatment.

In animal studies daily chamomile tea  consumption with meals was found to contribute to the prevention of the progress of hyperglycaemia and diabetic complications.

Some people may be allergic to chamomile, especially if they have existing allergies to other members of the Compositae family. The more chamomile is incorporated into everyday products like toilet tissue, the more this may become apparent.

Even so, chamomile is a very old and generally very safe remedy. It has no known adverse effect (unless you are allergic); it has no known drug interactions and can safely be used in pregnancy and for children.

However you choose to use chamomile make sure you pay attention to quality. Widely available tea bags contain highly processed flowers and leaves that have been round to a fine powder, often in relatively small amounts. To get a better brew consider using whole dried flowers rather than bags. If you can forage them fresh all the better.

To brew a soothing tea, pour hot (not boiling) water over fresh or dried blooms, steep, strain. As a rule of thumb you will need 2-3 teaspoons of dried flowers to make one large cup (250 ml/8 oz) of tea.

Choosing organic chamomile teas, tinctures and oils will give you all the benefits of the herb minus harmful chemicals or pesticides.

Chamomile has become such a popular remedy, particulary as a tea, that we risk taking it for granted