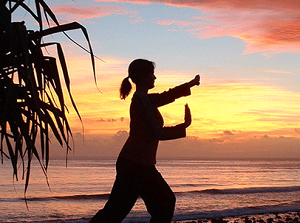 Numerous studies have shown that being physically active physical activity can help maintain health and even reduce your risk of early death from a range of causes. But do you really have to go at it long and hard to get these benefits?

Good evidence suggests the answer is no.

For instance a recent study found that a daily 20-minute brisk walk could reduce the risk of early death by 16-30%.

The link between lower levels of exercise and reduced mortality is also supported another recent study, conducted over a 12-years period, which suggests light jogging is most beneficial for lowering the risk of premature death whereas heavy workouts had the opposite effect.

While the occasional heavy session is unlikely to cause harm, and occasional sweaty exercise can even do us good, when performed for decades, very strenuous exercise, say the researchers, could pose health risks, especially to the cardiovascular system.

Yoga is a gentle and supportive practice that has roots as an ancient mind-body practice that incorporates physical, mental and spiritual elements. Originating in India, yoga has been proven effective in numerous studies to improve cardiovascular risk factors, with a reduction in the risk of heart attacks and strokes.

Most recently the benefits of yoga have been found to be comparable with walking and biking in helping to support heart health.

Investigators from the US and Netherlands looked at all the evidence from a huge range of studies on the subject. The aim was to analyse these studies to see if yoga could be beneficial in managing and improving heart disease risk factors (including blood glucose levels) and whether it could be an effective therapy for cardiovascular health.

Results showed that risk factors for heart disease improved more in those practicing yoga than in those individuals not taking part in vigorous exercise and that overall yoga was just as effective as more conventional forms of exercise.

When compared with no exercise, yoga was associated with significant improvement in the following areas:

The heart disease risk factor improvements in BMI, blood pressure and cholesterol levels were substantial when yoga was practiced in addition to medication. Meanwhile, in patients with existing coronary heart disease, yoga displayed a statistically significant benefit in lowering LDL cholesterol when added to statins and lipid-lowering drugs. In this study no improvements were found in terms of fasting blood glucose and glycosylated haemoglobin – though other studies have found benefits.

What this means is that those who are unable (or even uninterested) to perform aerobic exercise can still achieve cardiovascular benefits through yoga.

One of the reasons for yoga’s heart benefits may be the way it helps to reduce stress. This in turn helps calm the heart by reducing circulating levels of stress hormones.

And tai chi too

Another form of gentle exercise, tai chi has been found to help reduce inflammation which is at the root of many health problems.

In a study of older adults researchers found that high levels of psychological stress and/or loneliness were associated with the production of an inflammatory substance in the body called, nuclear factor (NF)-κB increased activity. But tai chi chih (TCC), another Asian discipline that integrates moderate physical activity, deep breathing and meditation to promote regulation of emotional and affective responses to stress, seemed to calm the stress response pathways reducing this markers of inflammation.

There are many studies like this, showing for instance that walking is better than running for heart health. There is also evidence that exercise – in whatever form you choose it is better than pills for treating many types of illness. In addition, practices like yoga and tai chi and simply walking around your neighbourhood, are not competitive, and they don’t require special memberships or special clothing or equipment. Anyone can do them and reap the benefits.

So instead of going for the burn, why not give some gentle exercise a try instead?