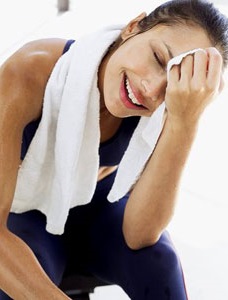 Getting sweaty could save your life

Natural Health News — Physical activity that makes you puff and sweat is key to avoiding an early death, a large Australian study of middle-aged and older adults has found.

Australian researchers followed 204,542 people for more than six years, and compared those who engaged in only moderate activity (such as gentle swimming, social tennis, or household chores) with those who included at least some vigorous activity (such as jogging, aerobics or competitive tennis).

They found that the risk of early death for those who included some vigorous activity was 9 to 13 % lower, compared with those who only undertook moderate activity.

“The benefits of vigorous activity applied to men and women of all ages, and were independent of the total amount of time spent being active,” said lead author Dr Klaus Gebel from James Cook University’s Centre for Chronic Disease Prevention.

What is more, says Gebel, “The results indicate that whether or not you are obese, and whether or not you have heart disease or diabetes, if you can manage some vigorous activity it could offer significant benefits for longevity.”

The current advice from the World Health Organization – and health authorities in countries including the US, UK and Australia – is for adults to accumulate at least 150 minutes of moderate activity or 75 minutes of vigorous activity per week.

“The guidelines leave individuals to choose their level of exercise intensity, or a combination of levels, with two minutes of moderate exercise considered the equivalent of one minute of vigorous activity,” said co-author Dr Melody Ding from University of Sydney’s School of Public Health.

However, she adds, the equation may not be as simple as that: “Our research indicates that encouraging vigorous activities may help to avoid preventable deaths at an earlier age.”

So who should get huffing and puffing, and how much do you need to do?

“Our research indicates that even small amounts of vigorous activity could help reduce your risk of early death,” Dr Gebel said.

For those with medical conditions, for older people in general, and for those who have never done any vigorous activity or exercise before, it’s always important to talk to a doctor first. However, adds Gebel “Previous studies indicate that interval training, with short bursts of vigorous effort, is often manageable for older people, including those who are overweight or obese.”

The paper, is published online in JAMA Internal Medicine.