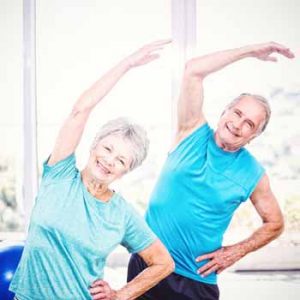 10-30 minutes a day of moderate activity could add years to your life. [Photo: Bigstock]

Keep moving…It’s the key to a longer life

Natural Health News — “Get up and move.” That’s the take-home message from a new study into the link between active and longer life.

Even for people who are generally active, swapping out just a few more minutes of sedentary time with some sort of movement was associated with reduced mortality, according to the research, published in the journal Medicine & Science in Sports & Exercise.

The researchers looked at data from approximately 3,000 people aged 50 to 79 who participated in the National Health and Nutrition Examination Survey conducted by the US Centers for Disease Control and Prevention (CDC).

» Even for people who already exercise, swapping out just a few minutes of sedentary time each day with some sort of movement can improve the chances of a longer life.

» US researchers used electronic devices to track the activity levels of 3000 people aged 50-79, which allowed them to get more precise data than ever before about people’s actual levels of physical exertion.

» Even 10 minutes per day of light activity made a small difference to longevity; but 30 minutes of light or moderate-to-vigorous physical activity each day made a significant difference.

For the study, subjects wore ultra-sensitive activity trackers, called accelerometers, for seven days, generating data which was then compiled by the CDC. The agency then tracked mortality over the next eight years for these same people.

“When we compare people who exercise the same amount, those who sit less and move around more tend to live longer,” said Ezra Fishman, the lead author of the paper.

“The folks who were walking around, washing the dishes, sweeping the floor tended to live longer than the people who were sitting at a desk.”

Previous activity-tracking studies have drawn similar conclusions. But, according to Fishman, such studies usually ask participants to monitor their own exercise frequency and quantity – numbers they notoriously over-report. Using electronic trackers provided the researchers with more precise data.

“Because the device captures the intensity of activity so frequently, every minute, we can actually make a distinction between people who spent two hours a day doing those activities versus people who spent an hour and a half,” he said.

Even 10 minutes a day matters

Though the scientists didn’t discover any magic threshold for the amount a person needs to move to improve mortality, they did learn that even adding just 10 minutes per day of light activity could make a difference. Replacing 30 minutes of sedentary time with light or moderate-to-vigorous physical activity produced even better results.

“You didn’t have to even get a good sweat to experience the reduced likelihood of mortality,” Fishman said. “Activity doesn’t have to be especially vigorous to be beneficial. That’s the public health message.”

In an ideal world, Fishman said the research would continue with an experiment that randomly assigned people to two groups – one that received an incentive to increase physical activity, one that didn’t – to establish conclusively that replacing sedentary behaviour with light exercise can reduce mortality risk.

He said he would also like to see public health officials get more creative about ways to encourage people to move more. Until these happen, however, it’s up to individuals to substitute movement for sitting still.

10-30 minutes a day of moderate activity could add years to your life. [Photo: Bigstock]