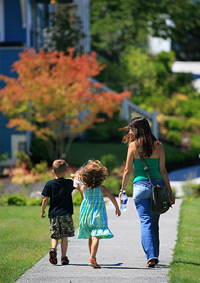 Natural Health News — People who live in neighborhoods that are conducive to walking experienced a substantially lower rate of obesity, overweight and diabetes than those who lived in more car-dependent neighborhoods

That is the conclusion of a pair of studies presented at a recent annual meeting of the American Diabetes Association.

Researchers in Canada compared adults living in the most and least “walkable” metropolitan areas in southern Ontario and found a lower risk of developing diabetes over a 10-year period for those who lived in neighborhoods with less sprawl, more interconnectivity among streets, and more local stores and services within walking distance, among other measures used to determine a neighborhood’s “walkability.”

The researchers controlled for variables, such as health at baseline, in order to rule out the probability that healthier people were choosing more walkable neighborhoods to begin with.

A second study that compared neighborhoods, not individuals, found that the most walkable neighborhoods had the lowest incidence of obesity, overweight and diabetes.

Specifically, the studies found that people living in neighborhoods with greater walkability saw on average a 13% lower development of diabetes incidence over 10 years than those that were less walkable. However, walkability was only protective in those who were younger and middle aged; those who were age 65 or older saw no benefit from living in a walkable neighborhood.

The researchers also noted that people who lived in the most walkable neighborhoods were three times more likely to walk or bicycle and half as likely to drive as a means of transportation.

How we build cities matters to our health

“How we build our cities matters in terms of our overall health,” said lead researcher Gillian Booth, MD, Endocrinologist and Research Scientist at St. Michael’s Hospital and the Institute for Clinical Evaluative Sciences (ICES) in Toronto.

She adds: “This is one piece of a puzzle that we can potentially do something about. As a society, we have engineered physical activity out of our lives. Every opportunity to walk, to get outside, to go to the corner store or walk our children to school can have a big impact on our risk for diabetes and becoming overweight.”

Marisa Creatore, co-author and Epidemiologist with the Centre for Research on Inner City Health at St. Michael’s Hospital, Toronto, added that the studies revealed the degree to which “your environment can influence your decisions about physical activity. When you live in a neighbourhood designed to encourage people to be more active, you are in fact more likely to be more active.”

Solving the obesity pandemic, concluded Booth, “will require both policy changes as well as individual strategies. We have to take a more population-based approach to the problem, given the environment we live in.”