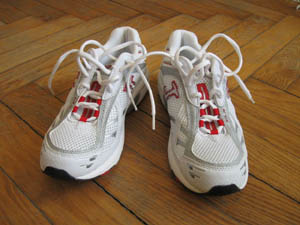 Get your shoes on and have an energetic walk - it's so good for your heart! [Image: alal - Morguefile]

Brisk walking benefits the heart as much as running

Natural Health News — Walking briskly can lower your risk of high blood pressure, high cholesterol and diabetes as much as running can.

“Walking may be a more sustainable activity for some people when compared to running, however, those who choose running end up exercising twice as much as those that choose walking. This is probably because they can do twice as much in an hour,” Williams said.

“People are always looking for an excuse not to exercise, but now they have a straightforward choice to run or to walk and invest in their future health,” he added.

This is not the first study to show benefits for brisk walkers. As far back as 1999 the New England Journal of Medicine found that that brisk walking can reduce the risk of fatal and non-fatal heart attacks in women to the same degree as vigorous exercise.

In 2011 scientists at University of California, San Francisco and the Harvard School of Public Health found that brisk walking  — at least three miles per hour — for at least three hours per week lowered risk of prostate cancer progression by nearly 60%.

In 2012 Danish researchers reporting in BMJ Open also concluded that the intensity of the walk was key to lowering the risk of metabolic syndrome. Fast walking speed halved the risk, while jogging cut the risk by 40%. Simply going  for an hour’s walk every day made no difference.

Get your shoes on and have an energetic walk - it's so good for your heart! [Image: alal - Morguefile]