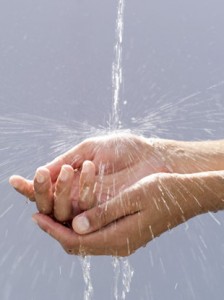 All types of burns benefit from being bathed for at least five minutes in cool running water.

How to heal minor burns and scalds

We all get minor burns and scalds from time to time.

Treatment obviously depends on the severity of the burn; more serious burns should be admitted to casualty, without attempting to remove clothing, which may further damage the skin.

But minor burns and scalds can be treated safely and effectively at home, so try these natural alternatives.

First rinse the area in clean, cold water for at least five minutes. Keep the area cool for up to three hours with a clean cotton cloth that has been soaked in cold water. Internal treatment for the shock, e.g. Five Flower or Rescue Remedy may safely be given.

Chemical burns must also be washed with cold running water for at least five minutes. If blisters form do not puncture as they form a protective cushion to the damaged area.

Aloe Vera An excellent remedy for burns, including sunburn. Grow a plant in the kitchen, break off a leaf and squeeze out the gel on the burn. It is also available commercially as an ointment or gel.

When using tinctures to treat burns, add a teaspoonful of tincture to a cupful of cool, boiled water. Soak a pad of gauze which must be large enough to cover the burn, in this solution. Apply the gauze, cover with lint and bandage.

Remove the lint whenever the dressing feels dry and re-soak the gauze by moistening it with a few drops of the lotion. This prevents any tearing of the new skin cells and allows undisturbed growth to take place under cover of the dressing. Once a scab begins to form the burn should be kept as dry as possible. Useful tinctures include:

Hypericum For deeper burns and scalds; also for burns which are becoming infected due to mistreatment. Apply as directed.

Nettle (Urtica urens)  For simple burns and scalds, dilute (add one tsp of tincture to a cupful of cool, boiled water) and use to bathe a minor bum which can then be left open to the atmosphere.

The same herbs used in tinctures can also be useful in ointment form for soothing minor burns and scalds. Apply liberally over the affected area as soon as possible. Either cover with a light dressing or leave exposed to the atmosphere.

Choose the remedy that best matches the symptoms. Give in addition to seeking urgent medical advice for more severe burns.

Cantharis 30 Burns and scalds with stinging; smarting pains where blistering is predominant. Three doses a day for two to three days.

Urtica Urens 6 or 30 For simple, non-severe burns and scalds. Two or three doses a day over two to three days.

Lavender essential oil Lavender is one of a very few essential oils that you can use neat on the skin. It is an effective way to soothe a burn, prevent infection, and help promote new tissue growth. The fragrance will also be useful for the trembling or panic that may accompany the burn. Apply liberally onto the affected area.

All types of burns benefit from being bathed for at least five minutes in cool running water.