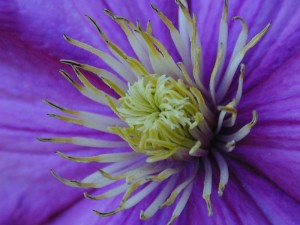 Clematis, one of the ingredients of the famous 'five flower' or Rescue Remedy flower essence [Image: Zanchetta Fabio - Wikimedia Commons]

It is said that there are no diseases, only sick people. This could describe the philosophy of those who practise any type of energy medicine, and in particular those who use flower essences.

Ancient philosophers maintained that life, or matter, was composed of energy and that all body processes were simply patterns of energy. According to this belief, subtle movements and changes in those energy patterns ultimately directed the course of health and illness.

Whereas modern medicine aims for stasis – a suppression of ‘undesirable’ symptoms, and indeed a body that is free of any symptoms at all – to ancient practitioners the ebb and flow of certain symptoms and body states was natural, even desirable, because where there is movement there is life.

The various forms of energy medicine – homoeopathy, acupuncture, spiritual healing and meditation – see the life force as something that sustains and organises the physical body. Their aim is to transform energy patterns directly using various techniques to stimulate the body in the direction of greater balance and encourage the body’s natural healing process.

In contrast, most conventional doctors dispute the existence of a life force because it is difficult to measure scientifically. If it can’t be measured, doctors argue, how do you know it’s there and how can you be sure that whatever you are doing to it actually works?

Dr. Edward Bach (pronounced batch), an English bacteriologist and homoeopath, is generally credited with the discovery of the healing properties of potentised plant essences. In the 1930’s he moved to the countryside in hopes of regaining his failing health. He walked daily in the woods and collected flowers and other botanicals near his home.

Using his grounding in both conventional science and intuitive diagnosis he began to develop his own individual theories on the way that personality types – first 12, then 19 and finally 38 different types, corresponding to the 38 remedies in today’s Bach repertory – influenced disease and how this effect could be mediated by the use of certain plant essences.

Bach hypothesised that flower essences helped to rid the body of negative emotional states, much in the same way that homoeopathy helps trigger the body’s own physiological defence system.

He believed that chronic stress resulting from emotional states such as anger, fear, grief, worry and resentment had a role to play in lowering a person’s resistance to disease. In his own practice he noted that his patients were prone to all sort of infections when these emotional states prevailed. This affirmed his belief that a person’s emotional outlook determined the length and severity of their illness.

At heart Bach’s philosophy works along the same lines as other constitutional therapies – the homoeopathy that he was so familiar with, but also older systems of healthcare such as Ayurveda and traditional Chinese medicine.

In addition to plant essences there are essences made from almost every natural substance there is. On the fringe of flower essence therapy there are people all over the world making and using environmental, colour and light essences, gem and crystal essences, chakra essences, ocean essences and even animal essences.

The sheer number of flower essences being developed and promoted is simply overwhelming. Nevertheless, their manufacturers claim subtle and not-so-subtle differences in their approach.

The Californian Essences work on a more esoteric level, and the Himalayan and Alaskan Essences, rather like their places of origin, can only be described as targeting the more remote parts of the human psyche.

Considering how potentially complex the argument can get, it is easy to see why Dr. Bach advised patients and practitioners alike to close off their minds completely to such explanations! It is also easy to see why many practitioners stick to the tried and tested, well catalogued (and relatively few) remedies of Dr Bach.

Working through the emotions

Flower essences are thought to work through the emotions and the psyche to heal the physical body.  In truth no one knows exactly how flower and other essences work.

They have never been formally tested, for instance in the accepted gold standard of a double blind randomised placebo controlled trial. Nor have they been proven scientifically to treat or cure anything. Nor is there any data on whether they produce measurable biochemical changes in the body.

Like many types of energy medicine, flower essences don’t lend themselves many accepted conventional forms of research and evaluation. The Bach Centre in Oxford has published an interesting rundown of the existing research and the problems inherent in studying them, in a paper titled Bach Flower Remedies – An Appraisal of the Evidence Base.

Unfortunately, Bach kept none of his research papers, lectured infrequently and preferred to diagnose intuitively, so his method of observing plants and ascribing various energies to them remains shrouded in mystery.

Practitioners who use flower essences often use the symbolism of nature to explain how they work. For a plant to produce flowers an enormous amount of energy needs to be focused on the blossom. From an energetic healing perspective the blossom of the plant has an energy that resonates with the very essence of the plant.

By making a remedy from the blossoms (a process which usually involves steeping the blossom in spring water and letting it sit in the sunlight for a few hours) this essence can be preserved.

A blossom is also symbolic of a plant in transition from one state of being to another and thus flower essence practitioners believe they can be particularly helpful in times of transition.

In spite of the lack of scientific evidence it is surprising how many people find flower remedies genuinely useful. Lack of research into their effectiveness does not alter this fact, nor has it made a dent in their popularity as a simple form of self-treatment.

Through case studies and anecdote, practitioners report that chronic illnesses – everything from hayfever and asthma to ME and lupus – which do not respond to conventional treatment, do respond in varying degrees to flower remedies.

Whatismore, flower remedies are portable and safe and can be taken by anyone including babies and even animals. In clinical practice flower essences are sometimes used on their own and also in a complementary way with orthodox medicine. They are intended to work gently with the emotions and the psyche enabling a person to deal with any conflicts or problems at a pace that suits them.

Flower remedies are widely available in health shops but you can also make your own by a fairly simple process.

How to make a flower essence

While walking through the woods near his Oxfordshire home, Dr Edward Bach the English bacteriologist and homoeopath, gathered dewdrops from flowers, plants and trees. He used these to make remedies that he tested on himself.

He began to notice that dewdrops exposed to sunlight were more potent than those that were not.

This knowledge evolved into what is known as the “sunlight method” for making flower essences.

You can use this method to make your own simple flower essences. Here’s what to do:

The resulting liquid, called a “mother tincture”, will keep for many years if properly stored (in a dark bottle in cool conditions).

To make a stock remedy from your mother tincture place two drops of mother tincture into a 1fl oz (30ml) dropper bottle containing a teaspoon of brandy and then fill with spring water. This remedy can then be take in water or on the tongue.

If you make your own remedies use your common sense. A great deal of literature exists to assist you in choosing only those flowers that are known to be non-poisonous and non-addictive.

Avoid those which grow by busy roadsides and which have been treated with pesticides. To make sure you get the best and most appropriate flowers, consider turning a patch of your own garden into a medicinal flower garden.

Clematis, one of the ingredients of the famous 'five flower' or Rescue Remedy flower essence [Image: Zanchetta Fabio - Wikimedia Commons]