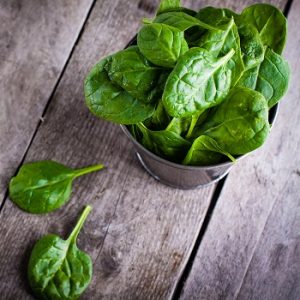 Thylakoids, substances found in spinach and other leafy greens, can help control weight as part of a sensible diet.

We all know that spinach and other dark leafy greens contains a powerhouse of essential nutrients.

One cup of spinach contains only 27 calories, but it is made up of protein, calcium, iron, magnesium, potassium, vitamin A, and folate. Magnesium assists in maintaining heart rhythm, a solid immune system, and blood pressure along with muscle and nerve function. Spinach has also been shown to lower blood pressure, improve bone health as well as skin and hair.

But did you know it also contains a substances called thylakoids that can help you feel fuller for longer?

» Spinach and other leafy greens contains substances called thylakoids, which are involved in photosynthesis.

» Isolated from the plant cell, thylakoids have been shown to help reduce hunger and cravings in between meals.

A new study found in the Journal of the American College of Nutrition looked at the effect of consuming a single 5g dose of concentrated extract of thylakoids from spinach on hunger, cravings, food intake, lipids, and glucose compared to a placebo.

Sixty people (30 males and 30 females) classified as overweight or obese took part. They consumed either the spinach extract or a placebo in random order at least a week apart. Using blood samples, their lipid and glucose levels were measured before a normal breakfast, followed by a dose of the extract and standard lunch four hours later. After another four hours, pizza was served, and throughout the interval, various blood tests and responses were gathered.

The results showed that the spinach extract containing thylakoids increased reduced hunger and cravings and increased blood glucose levels after the meal. The effect while impressive was short lived. By diner time any difference between the two groups had disappeared, though men showed a slight trend toward decreased energy intake.

According to lead, Frank L. Greenway MD: “The reduction in hunger and the desire for salty food that we saw in this study might make thylakoids particularly useful for people with high blood pressure and associated weight problems.”

The secret in the leaf

Thylakoids are essentially small pouches located in the chloroplasts of green leaves that have the ability to trigger satiety signals in us. However, eating spinach may not give you what you need since our bodies can’t break the chloroplasts down just through digestion. Processing – the leaves should be crushed, filtrated, and centrifuged – releases the beneficial compounds from the plant cells.

In earlier research, Professor Charlotte Erlanson-Albertsson, from Lund University in Sweden, who also took part in the current study, discovered that when humans were given a shot of the spinach extract in the morning, they felt less hungry and had fewer cravings during the day. They subsequently found it easier to stick to three meals a day, compared to the control group that was given a shot without the active substance. The thylakoid group also had had higher levels of satiety hormones in their blood, and had more stable blood glucose levels.

There was also an increase in leptin, another satiety signal, and lower insulin levels. What this showed was that thylakoids were able to suppress people’s appetites for longer, which could be useful for those who are trying to lose weight while battling constant hunger pangs.

According to Erlanson-Albertsson, when we eat modern processed food we are eating food that has already been ‘digested’ to some extent. This food is broken down so quickly in our guts that the hormones in the intestines, which are supposed to tell the brain we’ve eaten, don’t get a chance to work.. So we stay hungry. Thylakoids slow down the digestion process, and restore the link between brain and gut.

Although most research has focused on spinach other dark leafy greens contain these appetite suppressing substances too. So when you are making your green smoothie for the day don’t forget to throw in a handful of the following ‘fuller-for-longer’ green leaves

Kale It’s high in vitamins and low in calories. Kale comes in many varieties so experiment to find the one you enjoy most. If you find it a bit look for smaller, more tender leaves.

Spinach It’s high in folic acid, protein, and potassium. (In fact, a cup of cooked spinach actually has more potassium than a banana.)

Broccoli One of our most versatile veggies, broccoli is loaded with vitamin C and actually has more fibre than spinach and kale. Many people find broccoli more palatable than some of the more bitter greens.

Dandelion greens Easy to prepare, these are especially high in calcium and vitamin K. If you are sure they have not been sprayed with chemicals you can pick them wild, but health food stores and Asian markets also sell them in season

Mustard greens These spicy greens are full of antioxidants, especially vitamin A. Add to your juice/smoothies to give it a kick.

Seaweed Because of its high levels of iodine (necessary for proper thyroid function) seaweed is most definitely a superfood we could use more of. If you don’t use it fresh, look for powders that contain seaweed.

Algae Red, brown and blue-green algae are also good sources of thylakoids. Try adding some algae powder to your smoothie to give it an extra weight-balancing boost.

Thylakoids, substances found in spinach and other leafy greens, can help control weight as part of a sensible diet.