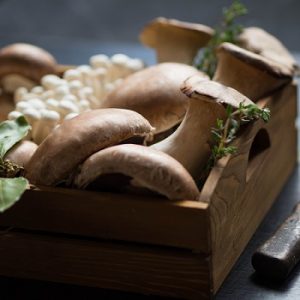 Grilling and microwaving can preserve, and in some cases significantly increase, the nutrient content of mushrooms. [Photo: Bigstock]

Love mushrooms? Here’s the healthiest way to cook with them

Mushrooms are considered a valuable health food, since they have a significant amount of dietary fibre and are low in calories and fat.

In addition, they have a good protein content (20-30% of dry matter) which includes most of the essential amino acids and also provide nutritionally significant levels of vitamins (B1, B2, B12, C, D and E) and trace minerals such as zinc and selenium.

They are also an important source of biologically active compounds with potential medicinal value such as beta-glucans – naturally occurring polysaccharides which support the immune system and can help strengthen resistance against allergies.

While some advocates would advise eating them raw, the truth is that most mushrooms are eaten cooked.

How we cook them – boiling, microwaving, grilling, and deep frying – has an influence on their nutritional profiles and in particular on the antioxidant levels. But until recently it has not been clear what the best cooking method is to retain the nutritional benefits of mushrooms

What you need to know» Mushrooms are a valuable health food, rich in nutrients, protein and antioxidants.

» In a recent study, grilling and microwaving preserved and in some cases significantly increased the nutrient content of mushrooms.

After the mushrooms were cooked, samples of both the raw and cooked mushrooms were then freeze-dried, and the proximate composition and the antioxidant activity were analysed.

The results revealed that frying induced more severe losses in protein, ash, and carbohydrates content but increased the fat and energy.

Boiling improved the total glucans content, especially beta-glucans, but it also significantly decreased the antioxidant activity as did frying.

The advantages of grilling or microwave cooking

Grilling and microwaving, by comparison, increased antioxidant activity with little loss of other nutrients.

They further found that adding a little oil portion while grilling mushrooms did not alter the nutrient sparing effect of grilling. “This minimal amount will not cause nutrient loses by leaching; in fact, the antioxidant capacity can be even improved. Moreover, if olive oil is used, the fatty acid profile of the final preparation is enhanced with barely increase in the calorie content.” they wrote.

Grilling and microwaving can preserve, and in some cases significantly increase, the nutrient content of mushrooms. [Photo: Bigstock]