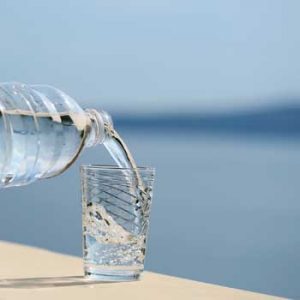 Dehydration can quickly have a profound effect on memory and focus. [Photo: Bigstock]

We’re often told we should drink eight glasses of water a day, check that our urine is not too yellow, and limit caffeinated drinks because they make us lose hydration.

Such everyday advice implies that dehydration is a common problem, but the traditional view when it comes to the science is that this view is not supported by research. Rather it has been assumed that if your lifestyle does not include prolonged activity, or the temperature is not particularly high, most of the time the level of fluid in your body will be in the normal range.

However, our new research, published in the American Journal of Clinical Nutrition, is challenging this received wisdom. We found, for the first time, that the functioning of our brains can be compromised by just a minor degree of dehydration.

» Dehydration is not just a problem of elite athletes – people living more sedentary lives can quickly feel its effects.

» New research suggests that the signs of dehydration – particularity memory loss and lack of concentration – can appear very quickly, even in those who are not exercising.

» Although this problem can affect anyone, children and older adults are particularly at risk.

Not just when you exercise

Previous studies have found when there is a water loss of around 2% of body weight then memory, attention and mood are adversely affected. This is typically associated with periods of extended physical activity – and much dehydration research has focused on this area, rather than the everyday water loss that we examined.

Water makes up nearly two-thirds of the body and is an essential nutrient, necessary for all aspects of bodily functioning including the distribution of oxygen and other nutrients, the removal of waste products and the regulation of temperature. Its importance is illustrated by a person dying within as little as three to five days if they do not drink. However, the body can be affected by dehydration well before the point of death.

It is well accepted that the performance of athletes will suffer if they lose too much fluid. During a single match, a footballer may run 12 or more kilometres and lose up to 3% of their body weight. If they initially weigh 75kg they will have lost 2.25kg – that is nearly five pounds of weight – which reflects a loss of half a gallon of water.

But fluid loss is a feature of daily life too, and occurs not just when we are exercising. We found that lack of water in the body begins to have an adverse influence well before the 2% loss that is typically associated with extended athletic activity.

To find out, we conducted a study involving 101 healthy adult participants in a controlled environment at 30℃ for four hours. We used an electronic scale to measure each participant’s body weight 50 times at five second intervals, to control for body movements. The scale was sensitive enough to measure to within 5g, so changes in weight due to breathing and perspiration could be detailed over short periods.

At the end of the four-hour period, we tested each participant’s memory by asking them to recall a word list after they had heard it. Focused attention was assessed using a flankers test, where the subject is asked to say whether an arrow is facing left or right with some distractions.

After an hour and a half into the study, the extent to which thirst was experienced predicted poorer memory and attention. At this point there was a loss of only 0.22% of body weight, a change that may well occur on warm days, when you are active or if you do not drink regularly. After four hours, when there was an average loss of 0.72% of body weight, urine concentration predicted cognitive functioning: those who were more dehydrated had poorer memory and attention.

Those who reported being more thirsty felt less energetic and more anxious; at the end of the four-hour period the other test subjects who had consumer water found the tests easier.

These findings show that the brain function of healthy adults is affected at a much lower level of dehydration than previously thought – but there may be groups that are at a higher risk of becoming dehydrated.

Children, for example, have a greater body surface area and often rely on adults to offer them a drink. Previous research we conducted found that when school children were given a drink in the afternoon, they had a better memory and spent more time on their classroom tasks.

Older adults too may also be at particular risk of dehydration as their kidneys become less efficient and the sensation of thirst declines.

The take away message is that even a minor degree of dehydration can disrupt brain functioning, so there is a need to take a few common sense precautions. Ensure you drink regularly and realise that if you sense thirst the functioning of your brain may be already compromised.

Dehydration can quickly have a profound effect on memory and focus. [Photo: Bigstock]