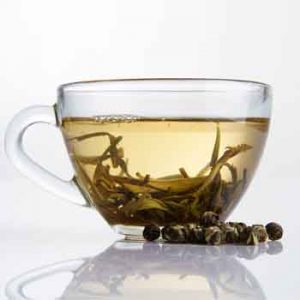 White tea, from young buds and shoots, may be naturally lower in fluoride and pesticides. [Photo: Bigstock]

Q – I’ve been reading a lot about fluoride in tea lately. Should I be worried?

A – Tea naturally contains some fluoride which is absorbed into the plant from soil and rainwater. This means the mineral is in the plant rather than on it.

Food is a major source and it’s worth saying that we all need some fluoride – which helps to build strong bones and teeth. Also, the synthetic fluoride used in dental hygiene products and in some types of pesticides, is not the same (and is more highly toxic) as the naturally occurring mineral. Because it is plentiful in food we don’t need to supplement and it is possible to get too much – for instance in areas where the water is naturally very high in fluoride or has had synthetic fluoride added to it.

So how much fluoride is in tea?

A 2013 study in the journal Food Research International analysed fluoride levels in 38 different teas, mainly bought from UK supermarkets. The analysis looked at black blends, green blends, pure blends, oolong, pu’er and economy blends and measured fluoride levels in both dry leaves as well as cups of tea brewed for 2, 10 and 30 minutes.

In brewed teas levels were significantly lower, ranging from 0.43 to 8.85mg per kg.

The longer the tea was brewed the higher the levels were and there were big differences between tea brewed for 2 minutes and tea brewed for 30 minutes.

Although, Waitrose Essential also had fluoride in it, levels were significantly lower compared to other economy black tea blends.

To make sense of this figure most experts recommend 4mg of fluoride daily for adults. An adult consuming one litre of economy tea daily (approximately 4 mugfuls), containing 6mg per litre of fluoride, would be getting 75-120% of the recommended fluoride allowance.

Other things to consider

Levels of fluoride in tea vary from year to year, according to where it was grown (acidic soil encourages more uptake in the plant) and when it is harvested (older leaves contain more fluoride than younger ones).

What’s in your cuppa, for instance, may also be higher or lower depending on whether the water you make it with is fluoridated. If you are worried about fluoride in the water supply you can tackle the problem at home with certain types of water filter – such as reverse osmosis. But this isn’t just a problem for home made brews. Ready-made iced tea drinks  – a popular alternative to carbonated sodas – may also be made with fluoridated water.

The natural accumulation of fluoride in tea, however, is only part of the picture of ‘what else’ you are getting when you brew up.

Teas are routinely treated with a wide range of pesticides while growing and post-harvest.

A 2014 report  Trouble Brewing produced by Greenpeace India revealed the systematic presence of mixtures of multiple pesticides, many classified as highly or moderately hazardous by the World Health Organization (WHO), in tea grown and sold in India as well as exported abroad by leading international and national brands such as Tetley, Lipton and Twinings.

Around 60% of the samples also contained residues of at least one pesticide above the Maximum Residue Levels (MRL) set by the European Union and nearly 40% exceeded these levels by more than 50%.

In total 34 different pesticides were detected including the highly hazardous oranophosphorous compound monocrotophos and neonicotinoid insecticides such as imidacloprid – associated with reproductive or developmental impacts in animals, as well as the global decline in bee populations and other beneficial insects.

Several of the residues were from pesticides, such as DDT, that were not even registered for use in the cultivation of tea in India.

The findings of this report were similar to a 2012 Greenpeace investigation on pesticides in Chinese tea.

Tea is not washed when it is processed and packaged, so whatever is on the plant when it is plucked stays mostly on the dried leaf. But as with fluoride, the levels of pesticides in a cup of tea can vary enormously.

Not all pesticides, for example, are easily soluble in water and researchers trying to get an accurate picture of pesticide residues in tea have found that different types of liquid (water, water with milk, water with different pH levels) can produce a different result.

As with fluoride, how the tea is processed can be influential on pesticide levels. Roasting at high temperatures has been shown to reduce levels of neonicotinoids in the finished tea. Carbamate pesticides, used widely in tea production, have also been shown to be heat sensitive. In the production of oolong tea, roasting at high temperature for a long period actually caused complete dissipation of two carbamates. Solar withering (drying in the sun) reduced pesticide residues by 25-40%.

Crushing and tearing leaves during processing, has been shown to free up the fatty acid content of a tea leaf and larger older leaves may also have a higher fatty acid content – these things may affect the final level of detectable pesticides in a cup of tea, many of which are more soluble in fats.

Nevertheless, it is clear from the Greenpeace study above and other data that significant transfer of pesticide residue from the plant to the cup is possible. And even if levels can be low, it’s worth remembering that a) many pesticides bioaccumulate in the body over time and b) cocktails of pesticides may have much bigger effects even at low levels. If you drink tea multiple times every day over a lifetime it can add up.

Just to complete the picture we should say that the chemicals in teabags are also an issue. Paper teabags can be bleached and treated with epichlorohydrin, a compound mainly used in the production of epoxy resins, which keeps the paper bag from falling apart in water. Residues from this process can get into your cup and, studies show, that when epichlorohydrin mixes with water, it produces a substance called 3-MCPD, which has been shown, in animal studies, to suppress immunity, cause cancer in animals, and reduce fertility in male rats.

Mesh tea bags won’t fall apart in water but that doesn’t make them a better choice. Mesh or silk bags – made from materials such as nylon, viscose rayon, and thermoplastic, PVC or polypropylene – are becoming increasingly popular but, in common with most plastics, can leech hormone disrupting chemicals into your cup – a process that is facilitated by exposure to hot water.

If tea is your drink of choice then consider these actions to reduce your exposure to harmful chemicals:

Ditch the teabag… or at least go for those that are unbleached. Some manufacturers now guarantee their bags are not epichlorohydrin-treated. Consider also buying loose leaf tea and brew the traditional way.  Or use a personal tea infuser. Bagged tea is also often made from older leaves which accumulate more residues. You might also want to change things up by using powdered matcha green tea.

Try oolong or pu’er teas In the 2013 fluoride study above pu’er and oolong teas had the lowest levels of fluoride, followed by pure blends, black blends and green blends.  Pu’er is a fermented tea and there may be something in the fermentation process that helps to reduce fluoride levels. Oolong is a semi-fermented tea and studies show that the processing it goes through may help remove some fluoride and pesticide residues.

Or try white tea According to the Linus Pauling Institute white tea, which is produce from young buds and shoots is very low in fluoride. It is also likely to be low in pesticides.

Go for the ‘first flush’ Levels of both fluoride and pesticides may be higher in in older leaves so consider buying first flush tea produced from the very first plucking of a tea plant’s harvest season. First flush leaves are the youngest and most tender part of the tea plant and produce a fresh, less astringent tea than subsequent flushes.

You get what you pay for Even if it’s not the first flush, younger tea leaves are more often used to make higher-quality premium teas, while older, leaves are chosen to make the cheaper economy brands.

Buy organic Organic teas are not treated with harmful pesticides, which means you don’t have to worry about toxic resides in you cup. The will still naturally accumulate some fluoride however.

White tea, from young buds and shoots, may be naturally lower in fluoride and pesticides. [Photo: Bigstock]