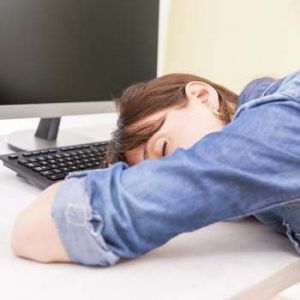 Exhaustion has multiple causes - you need to get to the root of it to begin to recover. [Photo: Bigstock]

Q – I seem to get plenty of sleep but I am so tired all the time. I’m beginning to worry there is something wrong. Can you give me some advice?

A – General tiredness and fatigue has become such a feature of modern life that most of us don’t even see it as a health problem, until of course it becomes a debilitating problem such as chronic fatigue syndrome (CFS).

Although fatigue is a part of life that we’re all familiar with, it can be difficult to describe and people express it in a variety of ways, using terms such as tired, weak, exhausted, weary, worn-out, fatigued, burnt out, wiped, etc. Health professionals describe fatigue using terms such as asthenia, fatigue, lassitude, prostration, exercise intolerance, lack of energy, and weakness.

Generally we can put the many ways that people express and experience fatigue into two categories: physical and mental. Although these two kinds of fatigue are sometimes difficult to separate and and they can overlap, the language we use to describe our own fatigue can usually provide a clue to it’s origins

Mental fatigue can occur when we’re emotionally or psychologically worn out and not coping with the stresses and strains in our lives.

We all have finite amounts of energy and reserves, and when these are taxed, either physically or mentally, or more commonly both, we experience fatigue. Tiredness is a sign that we need to stop and recharge our batteries in one way or another.

If we don’t rest enough or get enough sleep then we suffer from fatigue until we do. In a way it’s the same with mental fatigue It won’t go away until we get some respite from whatever is causing it. In some cases, such as in chronic fatigue syndrome, the two types of fatigue run in together and we get debilitating mental and physical fatigue.

Beyond the usual suspects several things can cause chronic tiredness. These include:

A huge number of medications can also cause fatigue including:

As the information above shows there are dozens of different causes of daily fatigue. Most research on debilitating exhaustion has been centred on chronic fatigue syndrome (CFS) a severe persistent fatigue that is very severe and not relieved by rest.

The origins of CFS are not clear and may be a mixture of oxidative stress, genetic predisposition, post viral syndrome (for instance when we do not allow ourselves to recover from colds and flu fully ) and immune dysfunction.

Problems in the hypothalamic-pituitary-adrenal axis – a major part of the neuroendocrine system that controls reactions to stress and regulates many body processes, including digestion, the immune system, mood and emotions, sexuality, and energy storage and expenditure – as well as psychological and psychosocial factors can also feed into CFS.

Because there are so many causes of fatigue, you may need to use more than one method to manage it and if it is severe and persistent you should seek professional help.

If your instinct is that you are just run down, or you are going through a period of stress in your life, you can support your body saying no to extra activities and long hours, by ensuring you sleep well (see our feature How to Get a  Good Night’s Sleep) and by using adaptogenic herbs. Adaptogenic herbs are best suited to those whose fatigue either is caused by, or is causing stress in their lives. See our feature on the Chinese Tonic Herbs for more.

Exhaustion has multiple causes - you need to get to the root of it to begin to recover. [Photo: Bigstock]