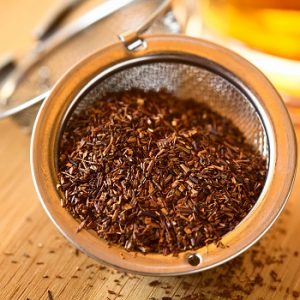 Red Bush tea, or rooibos, is a high in healthy anti-inflammatory and anti-oxidant substances [Photo: Bigstock]

Rooibos – so much more than a tea substitute

The herb rooibos is mostly known for its popularity as a caffeine-free tea substitute. But it is so much more.

It’s not until the plant is processed that the reason for its name becomes apparent – once the green needle like leaves are cut and left to dry in the sun, they turn a beautiful bright mahogany red.

To regular customers in the health food shop rooibos has long been a popular alternative to black tea. However its international profile soared with the publication of Alexander McCall Smith’s series of novels about The No. 1 Ladies’ Detective Agency. The Tswana detective Precious Ramotswe’s favourite drink is red bush tea (rooibos), which she often promotes as a therapeutic drink to her friends and clients.

Since the rooibos plant is actually a member of the legume family (the flowering plant family which also include beans and peas), it has quite a different nutrient profile to conventional black or green teas, which are made from the leaves of the camellia bush. It is extremely high content of anti-oxidants and has no caffeine and low tannin levels.

About half of all rooibos tea is drunk in South Africa and the rest exported mostly to Germany, Japan and the Netherlands and the UK.

Rooibos only grows in small area 250km north of Cape Town in the Cedarberg region of South Africa, in the Western Cape province, and is an important crop for local farmers.

This remarkably tough plant has evolved to thrive in a fairly inhospitable environment – very little rainfall and sandy, acidic soil. This is another important difference between conventional teas – which are widely treated during and after harvest with a range of pesticides and fungicides.

Part of the reason for the robustness of rooibos lies in the plant’s very long taproot, which can penetrate up to two metres into the ground. This means the plant can reach deep down into the soil for water, and as such can withstand very dry conditions.

As a legume, the rooibos plant can also bind its own nitrogen through bacteria on its roots which take nitrogen from the air and ‘fix’ it in the plant. This means that rooibos needs no irrigation or fertilisation, and so is cultivated today much as it always been.

The plant is harvested annually, with the green leaves being cut and collected into bundles. These are then taken to a processing yard where they are fed into a simple cutting machine and bruised with rollers. The plant material is then left in low heaps for the oxidation process to take place – this is when the characteristic bright red colour develops.

Rooibos tea was traditionally used by the local Khoisan tribe as an herbal medicine for a wide range of ailments. Through the 17th and 18th centuries it was adopted by the Dutch settlers in the Cape as an alternative to black tea, which was an expensive commodity brought on supply ships from Europe.

Today rooibos is becoming more popular in Western countries, particularly among health-conscious consumers, due to its high level of antioxidants such as aspalathin and nothofagin.

Hospitals in South Africa routinely use rooibos in baths for children with allergic skin conditions, as well as giving it as a drink. The infusion can be applied either directly to the skin, used as a wash to relive dry, itchy scalp, or used in skincare products such as soaps and cleansers.

Modern research has shown that its high antioxidant content can be useful in the treatment of  nervous tension, allergies such as dermatitis and indigestion. This is why it is often recommended for treating headaches, colic, asthma, hay fever and insomnia as well as acid reflux. It is also recommended for treating skin conditions such as eczema, psoriasis or dermatitis. It soothes nappy rash and improves skin condition in acne sufferers.

Laboratory studies show it may have the ability to reduce uric acid concentration in the body potentially making it useful in the treatment of gout.

Animal and laboratory studies suggest that the ability of rooibos to prevent oxidative stress may also play a role in alleviating symptoms associated with type-2 diabetes.

While rooibos does not contain the anti-cancer antioxidant Epigallocatechin-3-gallate (EGCG) found in abundance in tea it does contain two other antioxidant flavonoids, quercetin and luteolin, have been shown to have cancer fighting properties.

Quercetin has also been shown in clinical trials to relieve the painful symptoms of urinary system diseases such as prostatitis and cystitis.

Laboratory studies show that rooibos has the ability to prevent the cellular mutations associated with cancer – though no human studies have been conducted.

A study published in 2009 by Japanese scientists looked at the abundant antioxidants in rooibos tea and found that aspalathin and nothofagin have a strong anti-inflammatory activity that may prevent DNA damage and inflammation by its antioxidant activity.

Another 2009 study demonstrated that topical application of polyphenol-rich extracts of rooibos prior to UVB exposure inhibited the formation of tumours, suggesting the benefits of including rooibos in skin care products as part of the strategy for preventing skin cancer.

In a 2011 trial with human subjects a high regular intake of rooibos tea resulted in significant reductions in LDL cholesterol, triglycerides  and lipid peroxidation (the oxidation of cholesterol which is linked with damage to blood vessels and blocked arteries) and an increase in HDL cholesterol levels compared with the control group.

So much more than just a substitute for tea or coffee, rooibos is a beneficial herb that also provides a steady income for small farmers and local people in South Africa – especially if it is fairly traded. Give it a try!

Red Bush tea, or rooibos, is a high in healthy anti-inflammatory and anti-oxidant substances [Photo: Bigstock]