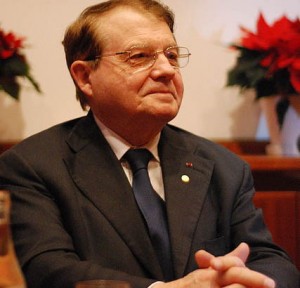 The “intellectual terror” that keeps homoeopathy out of the mainstream

A groundbreaking study  by an independent scientist has given credence to the memory of water’ theory which underpins homoeopathy.

Professor Luc Montagnier, a Nobel Laureate, credited with the co-discovery of the HIV virus, did not set out to prove that homoeopathy works. He was studying novel ways of detecting the HIV virus in the body.

The work involved infecting human white blood cells with a bacterium, Mycoplasma pirum, that is a common co-factor in HIV infections. A solution containing the infected cells was then passed through nano-filters to remove any trace of the infected cells. What remained was a sterile solution.

These electromagnetic signals remained even after the solutions were diluted and agitated several times. Although homoeopathy is not mentioned in this study, several of Montagnier’s findings accord with homoeopathic philosophy and with the studies of fellow French scientist Jacques Benveniste, credited with the first published studies showing evidence of the memory of water.

In homoeopathy, symptoms of disease are the result of abnormal changes within the body’s energetic fields. Homoeopathic medicines, which carry an ‘energetic imprint’ of the original substance they were made from, interact with the body on this level, restoring the energy field to its original healthy, balanced state and reversing the physical symptoms of the disease.

Interestingly, the dilution process Montagnier was using resembled the serial dilution and ‘succussion’ processes used in preparation of homoeopathic remedies.

Homeopaths believe that it is the succussion that makes homoeopathic remedies clinically active. Whatismore, in this study, the 10-5 to 10-12 dilutions which produced the strongest electromagnetic signals equate to homoeopathic potencies from 3c to 6c.

An electromagnetic signal was not detected in most of the experiments using higher dilutions so Montagnier’s paper cannot explain how higher potencies might work. Montagnier was so intrigued by his findings that he has decided to study this phenomenon in more detail.

In taking that decision he has come up against such opposition in the conventional scientific community that he has taken up a position at Jiaotong University in Shanghai where he will be free to study, with adequate funding and without blinkered opposition.

He notes in a recent interview in Science Magazine:  “I can’t say that homoeopathy is right in everything. What I can say now is that the high dilutions are right. High dilutions of something are not nothing… It’s not pseudoscience. It’s not quackery. These are real phenomena which deserve further study.” You can read the full text here.

Regarding the resistance of the conventional scientific community to studying these phenomenon he is scathing: “There is a kind of fear around this topic in Europe. I am told that some people have reproduced Benveniste’s results, but they are afraid to publish it because of the intellectual terror from people who don’t understand it.”