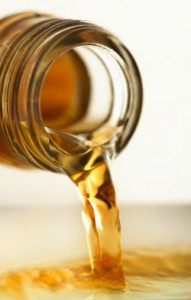 Vinegar is a naturally fermented product which contains health-promoting nutrients and antioxidants - and can even be used to clean your house!

The healthful properties of vinegar

Almost every household has a bottle of it somewhere.

It can be clear distilled, brown malted, sticky balsamic, mellow sherry- or wine- based or brewed from any number and variety of fruits including apples, blackberries, and quince or infused with herbs. In some Asian cuisines, coconut or rice vinegars are popular, while varieties made from honey, sugarcane, and date are popular in other parts of the world.

But there’s more to vinegar than salad dressings and marinades. Studies have shown that it also has multiple medicinal properties.

The earliest known uses of vinegar dates back more than 10,000 years and it started being produced and sold commercially across the known world 5,000 years ago.

In ancient Chinese medicine, vinegar (made from rice) is bitter, sour and warm and its function is to drain and treat stagnation. Thus it is used to support digestion and the liver and spleen, to heal bruises, boils and insect bites, to support oral and heart health and relive headaches.

The chemistry of vinegar is fairly simple; it’s a liquid consisting mainly of acetic acid and water. It’s produced by the fermentation of a starting material, such as grapes or apples or rice. As the starting material breaks down it produces alcohol and during this process acetic acid bacteria turn ethanol into acetic acid.

Although we now mainly used as a cooking ingredient, historically, as the most easily available mild acid, it had a wide variety of industrial, medical, and domestic uses, some of which (such as a general household cleaner) are still in use.

A variety of natural vinegar products are found in cultures around the world.

One recent review of research on these different types of vinegars indicates there are numerous reports of health benefits to be gained from consuming vinegar and its individual bioactive components.

Aside from acetic acid these components include gallic acid, catechin and ephicatechin (the same antioxidants found in tea), chlorogenic acid, caffeic acid, p-coumaric acid, and ferulic acid. Together these have been shown to have a range of healthful benefits.

Recent studies have also suggested that the bioactive antioxidant compounds such as polyphenols and vitamins in naturally fermented vinegar can help defend against oxidative stress – a risk factor for accelerated ageing, cancer and brain degenerative disorders.

According to the review, other functional therapeutic properties include beneficial effects on cardiovascular health and blood pressure, reduction in the effects of diabetes and faster recovery and reduced muscle damage after exercise. In addition, a few studies showed that consuming certain types of vinegar daily can help decrease appetite, while animal studies suggest that it is a natural fat fighter.

Apple cider vinegar also contains something called the “mother” – a cloudy substance that settles on the bottom of the bottle and is made up of living nutrients and friendly bacteria. Many nutritionists believe that this has a particularly beneficial effect on digestion and health.

The earliest uses of vinegar made us of its antimicrobial activities. The organic acids in vinegar and mainly acetic acid pass into cell membranes of microorganisms leading to bacterial cell death. This antibacterial activity is one reason why vinegar remains a popular natural household cleaner.

Vinegar is also a powerful cardiovascular protective compound through its effects on lipids, cholesterol, and blood pressure. A 2006 animal study found that acetic acid had “significantly lower values for serum total cholesterol and triacylglycerol” as well as having other health benefits. In a human study a reduced risk of fatal ischemic heart disease was observed amongst participants who ate vinegar and oil salad dressings frequently, while animal studies have shown a lowering of blood pressure.

It has also been shown to benefit those suffering from or at risk for type-2diabetes, as well as benefit healthy individuals. It is likely that the acetic acid in vinegar may prevent the complete digestion of complex carbohydrates by either delaying gastric emptying or by increasing the uptake of glucose by tissues resulting in reduced blood glucose levels.

These effects also promote vinegar as an antiobesity agent, but studies have demonstrated a satiating effect outside of glycaemic control.

Vinegar can be used as a beauty aid too. Try using it as a hair rinse to wash away product build-up or steep a generous sprig of rosemary in vinegar overnight (or simply add a few drops of rosemary essential oil) and use it to help combat dandruff.

Add a generous glug to bathwater to help relieve itchy or sunburned skin or cystitis, or add to a footbath after a long day to deodorise and soothe. For a detox facial mask try mixing equal amounts of a healing clay like bentonite, kaolin or green clay and a half water, half apple cider vinegar. Allow to dry for 10 minutes and rinse off with tepid water.

And in medicine too

The medical and industrial uses of vinegar continue to surprise us. In a recent study it was found to be an effective way to clear toxic waste from the groundwater supply. Scientists are also working on ways to use vinegar as a simple test for cancer. It has been found that a simple vinegar solution changes the colour of precancerous tissue making it a useful way to screen women for cervical cancer in parts of the world where Pap smears may not be available.

Although vinegar is very safe, a little bit of restraint is called for simply because it is an acid solution. In Chinese medicine overuse internally is thought to be bad for the spleen and stomach. Unless you are using it as an emergency treatment for bites and stings, or as a hair rinse, always use it diluted.  If you want to take a daily dose of vinegar in water, but don’t like the taste try adding a bit of stevia to the mix.

You can also try making your own therapeutic rose petal vinegar.

If you’ve never tried using vinegar therapeutically before, why not give it a try?

Vinegar is a naturally fermented product which contains health-promoting nutrients and antioxidants - and can even be used to clean your house!