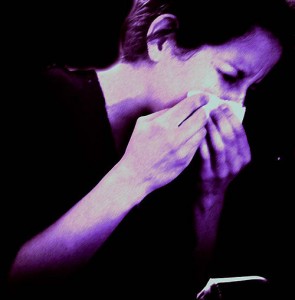 The physical symptoms of illness can also tell us whats going on in our heads [Photo: Wikimedia Commons]

The importance of being ill

Today we believe that good health is our “right”, something which should be bestowed upon us (by governments, doctors, etc.) rather than something which is acquired through our own actions.

When we are ill something is ‘wrong’ and it needs to be ‘fixed’ – very often with powerful drugs. Nobody likes being ill. It’s not fun and very often it happens at the most inconvenient times. But looked at in a different light, illness has meaning beyond just making us feel bad.

Looking beyond those troublesome symptoms to what lives beneath them, to the mind-body connection that influences everyone’s health, can yield some startling information.

Our bodies are miraculous things. The two trillion cells of the immune system (comprised of three types of white blood cells – phagocytes, T cells and B cells) constantly monitor conditions in the body to maintain the status quo. The while blood cells are smart enough to identify invaders in the body, whether they are viruses, bacteria, toxins or parasites.

Whether or not they have been seen before, immune cells can recognise these foreign substances, or antigens.  When a germ overcomes the natural defences of the skin or mucous membranes and invades the tissue, the body responds with a process known as inflammation.  White blood cells are ushered to the site where they gobble up the foreign substances.  Special chemicals are also released to help defeat the invading germ.

Many doctors will tell you that at least 95% of illnesses are self limiting.  In other words they will heal by themselves and do not require any medical intervention.  Of course prevention is an important part of health care, but just-in-case medicine, given without any clinical basis, can make symptoms worse and produce a whole range of new and even more debilitating side effects.

Good examples of this idea abound in our approach to things such common experiences as fever,and coughs.

Fever often develops during an infection. Although we generally think of fever as a bad thing, fever enhances the inflammatory response of the body, and certain components of the immune system work optimally at increased body temperature.   Also fever helps to limit the growth of some germs that cannot grow well at higher temperatures.

Coughing is your body’s way of getting rid of phlegm. Because of this suppressing a cough is not a good idea nor do you need expectorant – the cough is doing that job.  The use of cough remedies has been shown in numerous and extensive controlled trials to be useless. Other research has shown that antihistamine-decongestant combinations for young children confer no clinically significant improvement in symptoms after 48 hours.

The symptoms that we see as signs of the body’s frailty and inability to cope are, in short, signs that it is working well.

The concept of the milestone illness is an important one, physically and psychologically. In his groundbreaking book the Healing Power of Illness, Thorwald Dethlefsen offers this opinion: “Time was when all parents knew than when a child survives a children’s illness (all ‘children’s illnesses’ are infectious illnesses) it takes a step forward in development or maturity.  After the illness the child is no longer the same as before.  The illness has brought about a change that has made it more mature.

But then it is not only childhood illnesses that have such a maturing effect.  Just as the body emerges strengthened from each infectious illness that it survives, so the whole human being comes out of each conflict with greater maturity.  For it is only challenges that make us strong and fit.”

We are all familiar with the idea of psychosomatic illness. Often it is used to describe someone who isn’t really ill at all, but whose illness has been brought on by a weak mind or emotion. But another way of looking at it is that the mind-body connection in humans is so strong that all illnesses are really psychosomatic (that is affecting both psyche/emotions and soma/body).

This is as true or children as it is for adults. In the book Natural Childhood, Dr Michaela Glockler reminds parents, “In illness we become a physical picture of what we still have to learn.  In health, by contrast, we have an image of perfection we will achieve in the not too distant future.

The healthy body is an image of the nature of human beings: upright, open, exercising free choice, with the heart in the middle and all forces working in the right place and at the appropriate time, well ordered and controlled.  Furthermore, as human beings we can have experiences through suffering and pain, provoking new questions and learning processes that transform us as individuals.”

Dethlefsen maintains a similar perspective on the subject of chronic conditions such eczema and the rashes he says “Rashes always indicate that something which has hitherto been held back (repressed) is trying to break through the repression in order to come to the light (consciousness).  A rash allows something which was previously invisible to show itself.

This makes it perfectly understandable that nearly all childhood diseases such as measles, scarlet fever and rubella (German measles) should express themselves via the skin. With every childhood illness something new is breaking through into the child’s life, which is why so often childhood illness also brings with it a powerful stride forward in personal development.

The idea that the body speaks your mind is not new. Today it is increasingly gaining ground among alternative practitioners. Dethlefsen’s view may be hard for some of us to take on board. To do so requires a substantial shift in thinking and the way we act towards our children both in illness and in health.  Yet, for those who believe in holistic health, there is no denying the validity of much of what he says.

Taking ideas such as this on board can change your world view dramatically. In a world full of sensory stimulation is the peace and quiet necessary for recovery when we have a cold, or example, just another way of switching off, a rational response to stress and tiredness?

After all, Dethlefsen reminds us, how often does a person with a cold say something like “stay away from me”. Initially it seems like a protective gesture aimed at those around us, but keeping people away may well have a protective effect for the sufferer as well. Other practitioners liken the alternately blocked and runny nose and watery eyes of chronic “colds” as an outpouring of otherwise uncried tears.

By starting to look symptoms in this way we can gain valuable insight into the things which we may find difficult to express and find all important meaning in something which might otherwise seems random and meaningless.

Illness as a message

Finally the increasing number of us who are being affected by chronic complaints such as headaches, skin rashes, catarrh and breathing difficulties may be giving us an important message.  Environmental doctors would say that many of us are quite literally “allergic” to the 20th century.

We are all being bombarded with chemicals and toxins throughout the day.  Our children suffer more because their immune systems are still developing and because they are smaller and thus are taking in more toxins per pound of body weight than adults.

We may not be able to shut down the factory down the road, but we can take steps to improve the immediate environment in their homes and schools. What is more, although it may be contentious, it is also worth wondering why many adults will move house to get a better job or to have an easier journey to work or be closer to a goo school, but few consider moving house to acquire better health and health care for themselves and their families. Instead many cling to belief that the body is a machine – and if something goes wrong any available doctor/mechanic will be able to fix it.

Illness always challenges us in those places where we are most unsure of ourselves and also most unsupported.  As such it is easy to fall prey to the idea that we don’t know what’s going on or that we are missing something important.

Rarely do we stop to think of how often GPs in crowded surgeries miss something important or simply don’t know. Often, if person walks in with a collection of vague symptoms they are more than likely to be told that there’s “something going round” or “it’s probably a virus”.  This is not a medical diagnosis, it’s a guess.

Under these conditions when a doctor writes our a prescription for medication it is usually to address a patient’s concern and frustration as much, if not more, than it does the actual illness.

To be health conscious is to understand that there is always “something” which is “going around”. There are viruses and bacteria in us and around us all the time.  The virus which causes flu or measles may be inside you or your children right now.

But you are not ill because you immune system is working efficiently. What makes you susceptible to these things – allergies, run down immune system, emotional distress –  is the real question and one which can’t be answered by the latest miracle drug.

The physical symptoms of illness can also tell us whats going on in our heads [Photo: Wikimedia Commons]