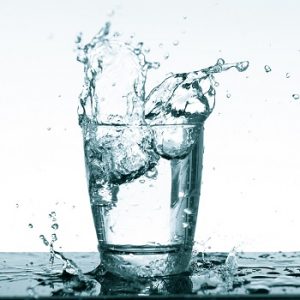 Many of us have no clue about the optimal amount of water we need each day to say healthy [Photo: Bigstock]

Water – too much of a good thing?

Every living thing needs water. The human body is two thirds water and logically we need water every day in order to survive.

And so, on the basis that if a little is good for you a lot must be really good for you we have become a nation of water drinkers.

The addiction to water – which is more social than physiological – has become such that we willingly lug around large plastic bottles all day like portable fountains of youth designed to stave off dry skin, constipation, fatigue, and even the common cold. The designer water bottle has become a badge for the smart set that lets the whole world know just how healthy they are.

There is even an acknowledged water drinker’s bible, Your Body’s Many Cries for Water written by Dr Fereydoon Batmanghelidj  in which the premise is put forward: “you are not sick, you are thirsty.” According to the Iranian born doctor painful joints, obesity, depression, migraines and more can all be cured if we just drink enough water.

While most humans can live for weeks without food, it is true that we would die in a matter of days without water. Adequate hydration is necessary for nearly every bodily function including digestion, transportation and absorption of nutrients, circulation, excretion, building tissue and maintaining body temperature.

While water can’t breakdown fat, it can help to remove the toxic by-products created by the breakdown of fatty tissue. Keeping hydrated can ward off constipation, there is even evidence that keeping adequately hydrated (around 5 glasses a day) can cut the risk of colon cancer in half.

But while dehydration can be deadly, there is scant evidence that drinking extra water can be beneficial. Indeed, in a recent editorial the British Medical Journal Dr Margaret McCartney  suggested that, as a nation, we have become “waterlogged”.

She made a scathing attack on the bottled water companies who continue to promote so-called ‘healthy hydration’ without ever defining what that actually means. Dr McCartney’s robust critique was not exactly news. Many scientists, nutritionists and doctors have known for years that here is no real scientific basis for our water addiction.

And, of course, it is possible to drink too much water. Consider this the next time someone tells you something is “as safe as water”: drinking 13 litres in a day can dilute the concentration of sodium in your blood and may cause seizures and impaired thinking.

Drinking 7 litres of water in a half an hour would probably kill you. Many of the deaths associated with the use of Ecstasy have come as a direct result of people becoming paranoid about dehydration and over-hydrating themselves in a short period of time.

Most of us have grown up with the idea that ideally we should drink 8 eight-ounce glasses (approximately 1 ¾ litres) of water a day. But outside of the field of sports medicine it is almost impossible to find good evidence to back up such claims.

Few of us are training for the triathlon (endurance sports are probably the only place where over-consumption of water, for instance drinking up to a litre of water prior to extreme exertion, may be justified) and information about how much fluid sedentary to moderately active individuals need less clear cut.

This means that an active person weighing 10 ½ stone needs 2.75 litres (5 ½ pints) of water daily and a sedentary person at the same weight needs 2 litres (3 ¾ pints). And although super thin supermodels may boast that they get through a two litre bottle each day, by these guidelines an eight stone woman is only likely to need 1.5 litres (just over 3 pints) of fluids each day.

However, in the same way that adequate nutrition has little to do with how many vitamin pills you take, adequate hydration is not just a matter of drinking lots of water.

Instead, it is a matter of checks and balances. How much you will need depends on things such as your level of activity, what kind of foods you regularly consume and even the climate you live in.

We each need around 2 litres a day to stay optimally hydrated. More than that, say three litres a day, especially in a cold climate, is simply unnecessary. It is estimated that each day the body loses approximately 1.5 litres of water through sweating, breathing and urinating. This must be replaced.

But the good news is that your daily fluid supply doesn’t all have to come from a bottle or a glass. Fruits and vegetables supply water in a form which is very easy for the body to use, while at the same time providing the body with a high percentage of vitamins and minerals.

Also on the plus side we release about 1/3 of a litre of water into our systems each day when we burn glycogen for energy. When the body digests carbohydrates, they are broken down into glucose – used to meet immediate energy needs – and glycogen.

Glycogen is stored in the muscles and liver for future use. Each molecule of glycogen holds on to 9 molecules of water which is released during the course of your day and at times when you need it most, like during intense exercise.

Not all water comes in bottles

Assuming you are eating a diet rich in fruits and vegetables you are already on the way to getting enough water each day. In practical terms, four pieces of fruit and a four servings of vegetables each day can provide a litre of water.

People whose diet is composed of around 50% fruits and vegetables usually have no trouble getting all the water they need.  Combined with the water released from burning glycogen many of us are already getting 1 1/3 litres of water each day before we even lift a glass to our lips. The remaining 1/3 to 1 litre of water daily – depending on your weight and level of activity – can be made up without too much effort by drinking water, diluted juices or herb teas.

No evidence exists to suggest that taking in more water than you need will make you more healthy and, although the notion is rejected by conventional medicine, some philosophies such as macrobiotics and traditional Chinese medicine believe that excessive fluid places too great a strain on the kidneys.

In his original treatise on macrobiotics George Ohsawa described the ‘drink-as-much-as-you-can’ philosophy as “simple minded” and suggested that an excess of water in the system could reduce vitality and lower body temperature as well as straining the kidneys.

If you do feel the need to drink lots of water, according to American Nutritionist Annemarie Colbin, founder of the Institute of Food and Health, it may be because your diet is too high sugar and protein: “Did you ever notice that sweets make you thirsty? Sugar is deficient in just about every nutritional element, including water. If we eat 100 grams (about 9 tablespoons) of pure refined sugar, theoretically we need about 28 to 30 ounces of water to counter balance it.

The same is true with meat.  Although some meats contain water, it is in relatively low proportions compared with other foods such as cooked beans and rice. High protein diets also ‘thicken’ the blood. This is why such diets always recommend you flush out your kidneys with lots of water.  If you are genuinely thirsty, you may not just need more drinks, you may need to adjust your diet.”

If you want to increase your daily intake, try adding one ½ pint glass of water every other day until you are drinking as much as you need.

Some individuals may also need to make adjustments in the type of liquids they consume. Studies into fluid consumption suggest that the average person drinks plenty of liquids each day.

The problem is that many of these are “drying” liquids – those which ultimately rob the body of water.  Coffee, tea and any other caffeinated drinks act as diuretics, leeching water from your system.  Alcoholic drinks do the same thing.

These kinds of liquids don’t count towards a healthy daily fluid intake. If you’re going to drink coffee or tea opt for decaffeinated types or switch to herbal teas. Substituting the occasional bottle of low- or no-alcohol beer for your usual pint is also a good idea.

Many of us have no clue about the optimal amount of water we need each day to say healthy [Photo: Bigstock]