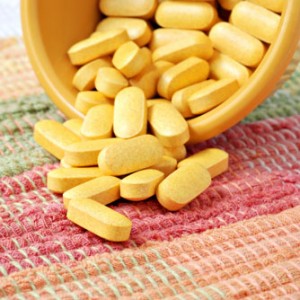 Natural Health News — Foods high in vitamins B2 and B6 may help protect against colorectal cancer but, according to a new study, a question mark hangs over foods supplemented with synthetic folic acid.

Researchers from the Fred Hutchinson Cancer Research Center (Washington, USA) were exploring the effect of vitamins B2, B6 on colorectal health in a group of 88,045 postmenopausal women who were recruited between 1993 and 1998.

The Women’s Health Initiative Observational Study, from which the study participants were drawn, spanned the time period in which the United States introduced mandatory fortification of grain products with folic acid (a synthetic form of folate), so the researchers were also keen to understand the effect of this as well.

Additionally, those with the highest intakes of pyridoxine (vitamin B6, over 3.88 mg per day) were found have a 20% lower risk (as compared to women with average intakes at less than 1.52 mg per day).

This protective effect was particularly strong among women who consumed alcohol infrequently (less than 13 g of alcohol per week). This makes sense since alcohol disrupts B vitamin absorption and would therefore interfere with their protective effect.

The researchers concluded that increased intakes of the vitamins B2 and B6 may keep levels of homocysteine, which has been linked to elevated colorectal cancer risk, low.

Dietary, supplemental, and total folate intake were not associated with colorectal cancer risk. However, the results indicated that women who were exposed to the initial period of the mandatory folic acid fortification program (introduced in the US in 1998) for between three and nine years experienced what they termed a ‘transient increased risk’ of colorectal cancer.

The increased risk – which occurred between three and nine years after the folic acid mandate – could arise from the fact that in the early days of food  fortification with folic acid, total folate content of several fortified foods initially exceeded the amount specified by federal regulations.

Another explanation is that the fortification of foods is generally done with synthetic folic acid, rather than the substance we naturally find in food, known as folate.

The researchers could not determine whether transient increase in risk was related to too much supplementation or due to the supplement being the synthetic form of the nutrient.

The folic acid used in fortification is in the form of pteroylmonoglutamate (PGA), a form that does not occur in nature. It is believed that the body has trouble converting more than 266 mcg of synthetic folic acid per day. Whatismore, build-up of PGA in the body may interfere with absorption of natural folate, which may interfere with folate metabolism for a period of years.

A 2004 paper from the British Medical Journal confirmed this warned that high levels of supplementation with folic acid may have unknown negative consequences in the human body.

Natural folate is abundant in a large number of natural, unprocessed foods, including most leafy green vegetables including romaine lettuce and broccoli. It can also be found in many fruits such as citrus, banana, raspberries, cantaloupe, honeydew as well as pulses, seeds including sunflower seed; and many whole grains including whole wheat and oats.

Most nutritionists agree that a diet based around whole foods will supply sufficient folate. For those with a questionable diet, there are whole food supplements available that include natural source folate.