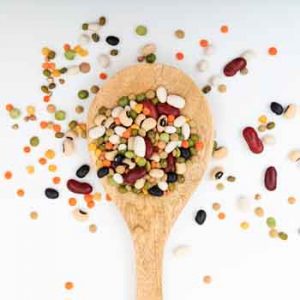 Riboflavin, or vitamin B2 occurs naturally in legumes as well as eggs, milk, cheese, other dairy products, vegetables and lean meats. [Photo: Biogstock]

B vitamins could protect against throat, stomach cancer

Natural Health News — Getting more vitamins B2 and B12 could help reduce the risk of throat and stomach cancer, according to new research.

B vitamins are important for the production, maintenance, and regulation of DNA – the blueprint cells read in order to make the molecules necessary to carry out their functions. DNA damage or impairment of DNA-related processes can greatly disrupt cellular processes and ultimately lead to cancer.

Although there have been several studies looking at B vitamins and other types of cancer, there is little data on the relationship between levels of B vitamins and gastrointestinal cancers, especially those of the throat and stomach.

» An analysis from China, which looked at supplementation with a variety of B vitamins, suggests that vitamin B2 (riboflavin) and B12 (cobalamin) may have significant protective effect when it comes to oesophageal and stomach cancers.

» Not all B vitamins were protective which, the scientists say, suggest the picture of vitamins and their contribution to cancer risk may be more complex than we think.

The adult participants were part of a nutritional intervention trial conducted between 1985 and 1991. They came from Linxian, China – an area with persistent malnutrition and very high rates of OSCC and GCA. All were given dietary supplements or a placebo and then monitored over the years for rates of OSCC, GCA, cancer-related and overall deaths.

735 people with either OCSS or GCA were compared to a randomly selected control group with or without these diseases.

Vitamin B2 was associated with a lower risk of OSCC. This association was stronger in women than in men, and in those over the age of 60. Overall, the prevalence of OSCC among those with the highest blood levels was 44% lower than average.

B2 was also associated with a decreased risk of GCA in those 50 or older those with the highest blood levels of B6 were 40-47% more likely to have OSCC than average.

Other findings suggested that:

this was a complex and careful study by the Chinese researchers. However it’s worth noting that it was conducted among a chronically malnourished population. Whether the findings are applicable to a well-fed population si unknown.

Nevertheless there is other evidence also from China that low levels of folic acid and B2 are related to the development of oesophageal cancer. IN addition from the US a 2013 study found that that greater folate and vitamin B6 and B12 intake was related to a decrease in risk of various oesophageal cancers – unless you were a smoker.

What all these studies suggest is that was that the interplay between vitamins and their metabolites, and their contribution to cancer risk, may be complex.

The researchers suggest that riboflavin (B2) in particular should be given more consideration for its cancer preventing action.

Riboflavin, or vitamin B2 occurs naturally in legumes as well as eggs, milk, cheese, other dairy products, vegetables and lean meats. [Photo: Biogstock]