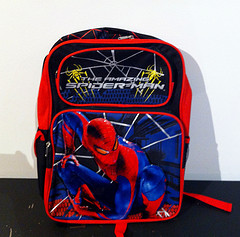 A new report has found high levels of hormone-disrupting phthalates in kids back to school supplies [Image: courtesy CHEJ]

Natural Health News — A brand new report reveals that toxic chemicals linked to asthma and birth defects that are banned in toys were found to be widespread in children’s vinyl back-to-school supplies.

The CHEJ tested 20 different school supplies and found that 15 of them (75%) had phthalate levels considered dangerous in toys.

The new report Hidden Hazards: Toxic Chemicals Inside Children’s Vinyl Back-to-School Supplies was released in New York City this week outside a branch of Kmart – a major US discount store – where some of the school supplies were purchased.

Four out of four backpacks and lunchboxes had above-the-limit levels. In fact, one backpack, featuring the beloved Dora the Explorer, contained 69,300 ppm of DnOP, a type of phthalate.

To put that in perspective, if a toy contained a part that could be inserted into a child’s mouth and had the same level of phthalates it would be 69 times over the US federal limit.

No different in Europe

Although the survey examined products in the US, most of the school supplies examined were produced by international companies whose products are also on sale here in the UK.

In the US regulations state that certain phthalates are banned in toys: Toys must contain less than 0.1% of three phthalates, DEHP, DBP, and BBP. Those regulations, however, don’t crossover into classroom materials.

The situation is similar in the EU where DEHP, BBP, and DBP are restricted for all toys; DINP, DIDP, and DNOP are restricted only in toys that can be put in the mouth. The amount of phthalates may not be greater than 0.1% of the plasticised part of the toy.

However these same phthalates are allowed at any concentration in other types of EU products (such as school supplies) and other phthalates are not restricted.

Among EU countries only Denmark has gone beyond EU rules and banned four phthalates – DEHP, DBP, DIBP and BBP – completely. The ban comes into effect from Spring 2013.

“Unfortunately, while phthalates have been banned in children’s toys, similar safeguards don’t yet exist to keep them out of lunchboxes, backpacks and other children’s school supplies” he added.

Schade called for the US government to pass the Safe Chemicals Act to protect children from toxic exposure.

“It is disturbing that millions of young children are being exposed to these toxic chemicals with no enforcement to protect them,” said Judy Braiman of the Empire State Consumer Project, co-publisher of the report.

An array of health problems

Phthalates, chemicals used to soften or make plastics more flexible, are found in everything from toys to food packaging to nail polish. Exposure (even to relatively low levels) can the endocrine system and increase your risk triggering an array of health problems.

“Phthalates are chemicals that have been linked to asthma, ADHD, and other chronic health problems in children. This new report has now shown that many common products specifically intended for children have high levels of phthalates. It is imperative that parents are educated about how to protect their children by buying safer PVC-free school supplies, and that our lawmakers pass legislation to protect children from the long-term health effects of phthalate toxicity,”

Want to make sure your children’s supplies are safe? The CHEJ have produced a downloadable information brochure that includes helpful hints. You can also download a wallet guide to safer products.

When purchasing school supplies make sure to:

A new report has found high levels of hormone-disrupting phthalates in kids back to school supplies [Image: courtesy CHEJ]