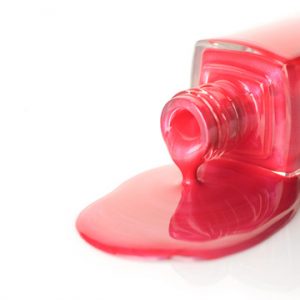 Nail polishes contain hormone-disrupting chemicals that can leech quickly and easily into the body. [Photo: Bigstock]

Natural Health News — When it comes to nail polish those appealing bright candy colours can hide a toxic secret.

A new study by researchers at Duke University and the Environmental Working Group (EWG) has shown that the 8 out of 10 nail polishes tested contain the toxic chemical triphenyl phosphate, or TPHP.

Worse, the results reported in the journal Environmental International represent compelling evidence that TPHP, also used in plastics manufacturing and as a fire retardant in foam furniture, quickly leeches into the human body via nail polish.

» A significant proportion of nail polishes on the market contain a hormone disrupting chemical called triphenyl phosphate, or TPHP.

» Although this chemical was incorporated into nail polish formulas as a safer substitute for hormone-disrupting phthalates, animal studies have linked it with reproductive disorders and even possible weight gain.

» Researchers suggest women are particularly vulnerable to the effects of this chemical and that exposure is particularly risky for young girls who are still developing.

TPHP is listed on the ingredient labels of a wide array of nail polishes now on the market. Of the more than 3000 nail polishes listed in the EWG database around 49% contain TPHP. This figure is likely to be an underestimate since many manufactures don’t disclose this ingredient on the label.

Indeed, in the news study, two of the eight polishes that tested positive for TPHP did not disclose its presence on product labels.

The Duke researchers would not make the names of the name of the brands they tested public. However some of the brands in the EWG database which are known to contain TPHP include OPI, Sallie Hansen, and Revlon, Wet N Wild, Maybelline and Beauty Without Cruelty.

TPHP is a plasticiser, added to make nail polishes more flexible and durable. The concentrations in the eight nail polishes with TPHP ranged from 0.49 percent to 1.68 percent by weight.  Clear polishes generally contained more TPHP than coloured ones.

The study found that when women applied nail polish with TPHP directly to their nails, the levels of diphenyl phosphate or DPHP, (a breakdown products of TPHP) in their urine increased sharply.

Specifically 2-6 hours after they painted their nails, 24 of the 26 volunteers in the study had slightly elevated levels of DPHP in their urine. Ten to 14 hours after polishing their nails, the DPHP levels in all 26 participants had risen by an average of nearly sevenfold, suggesting that more of the TPHP had entered their bodies and been metabolized into DPHP.

The results are troubling because a growing body of scientific data from other studies indicates that TPHP is a hormone-disrupting chemicals, meaning that it interferes with normal hormone functioning. In animal studies, it has caused reproductive and developmental irregularities.

Even more worrying, recent studies suggest that TPHP interacts with a protein central to regulating the body’s metabolism and production of fat cells. Scientists are conducting more investigations to discover whether, in fact, TPHP contributes to weight gain and obesity.

Another ‘safe’ alternative that isn’t

Nail polish manufacturers currently use TPHP as a replacement plasticiser for dibutyl phthalate, or DBP. This chemical fell out of use in nail polish because highly publicised scientific studies showed that DBP and other phthalates are likely endocrine disruptors and toxic to the reproductive system.

Urine tests have found that Americans are extensively exposed to TPHP, probably because of its use in plastics and flame retardant furniture. However, women are at particular risk. Another Duke study found significantly higher levels of DPHP in women than in men who were tested in a separate study. These findings suggest that women may absorb more TPHP through personal care products, such as nail polish, that are marketed specifically to women.

Another study conducted last year by Duke and EWG researchers found DPHP, the metabolite of TPHP, in the urine of 95% of the adults and 100% of the children studied.

Studies in Australia, Japan, the Philippines and Vietnam have found similarly high contamination.

These results indicate that nail polish may be an important contributor to short-term TPHP exposure. For frequent users of nail polish, exposure to TPHP may be a long-term hazard.

Given the high use of nail polishes amongst young girls and women, it also raises the prospect that millions of American teens, tweens and even younger girls are being exposed to a suspected hormone-disrupting chemical at a time when their bodies are rapidly developing and entering puberty.

Nail polishes contain hormone-disrupting chemicals that can leech quickly and easily into the body. [Photo: Bigstock]