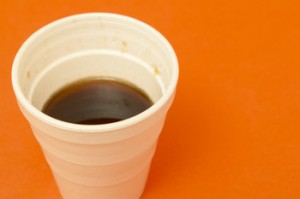 Most people know that some plastics additives, such as bisphenol A (BPA), may be harmful to their health.

But an upcoming study in the journal Environmental Health finds that entire classes of plastics – including the type commonly referred to as styrofoam and a type used in many baby products are leeching into our food and drinks from supposedly safe containers.

The study’s authors tested 14 different BPA-free plastic resins, the raw materials used to make plastic products, and found that four of them released chemicals that mimic the female hormone estrogen.

But until now, it wasn’t clear what role the resins played. The new study suggests that sometimes the resins themselves are part of the problem, though additives such as dyes and antioxidants can make it worse.

In the case of polystyrene – the resin used in styrofoam and similar products – the authors tested 11 samples and consistently found estrogen seepage after exposure to intense steam or ultraviolet rays.

Styrofoam is a registered trademark of Dow. The company stresses that its product is used for crafts and building insulation, not food and beverage containers. (“There isn’t a coffee cup, cooler, or packaging material in the world made from actual Styrofoam,” according to Dow’s website.)

But generic polystyrene foam, which most people call styrofoam anyway, is ubiquitous in the food-services industry, where its found in everything from meat trays to takeout containers.

Polystyrene resin, which the US Environmental Protection Agency has labelled a suspected carcinogen, is also used to make hard plastic items, including utensils and toothbrushes.

The study also looked at three different types of Tritan, a novel plastic marketed as a safe, estrogen-free alternative to BPA-laden polycarbonate, and found that all of them leached estrogen-like chemicals.

That’s bad news for consumers, given that hundreds of household products – including water bottles, water filter pitchers, infant sippy cups, blenders and food storage containers for both home and catering use – are made from Tritan.

As part of the study, researchers soaked plastics resins in a variety of common solvents and tested the chemicals that seeped out using a line of breast cancer cells (MCF-7) that proliferates in the presence of estrogen and a line of ovarian cancer cells (BG-1) that lights up when exposed to the female hormone.

The 200-plus samples of Tritan resins that were tested consistently leached estrogen-like chemicals after being exposed to a type of ultraviolet ray found in sunlight (UVA) and another kind that some parents use to sterilise baby bottles (UVC).

In some cases, samples that hadn’t even been exposed to UV light also seeped estrogenic compounds.

While the authors didn’t identify the specific hormone-mimicking chemical (or chemicals) that leached from the resin, they tested one Tritan component – triphenyl phosphate (TPP)—and found it was estrogenic.

According to a report in Mother Jones, These findings are consistent with data collected by Tritan’s manufacturer, Tennessee-based Eastman Chemical. In 2008, the company commissioned a study that used computer modelling to predict whether various Tritan ingredients could imitate estrogens, based on their chemical structures. It found that TPP was likely to be more estrogenic than BPA.

Eastman, which never disclosed these findings to its customers, later commissioned another study, this one involving breast cancer cells. Again, the initial results appeared positive for estrogenic activity.

The company insists that Tritan is not estrogenic, and insists that there is little risk of TPP leaching from Tritan containers because it breaks down during the manufacturing process.

However, as the Mother Jones report points out, several studies suggest this may not be the case.

And of course, with hormone mimics, as we have written before, the dose does not make the poison; even small amounts can cause health havoc in the body. This means that there is really no safe dose of such substances, especially for vulnerable children and pregnant women.