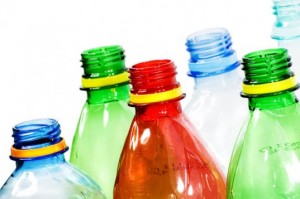 What that ‘BPA-free’ label isn’t telling you

Purchase a plastic water bottle, and there’s a good chance that it will feature a “BPA-free” label.

You might be seeing it more often because the industrial chemical Bisphenol-A has now been removed from a wide array of products. But, are products that are “BPA-free” actually less risky? And do these labels actually effect consumer behavior?

To start, let’s remind ourselves what Bisphenol-A is used for: to make many kinds of plastics and resins. BPA is found in products ranging from polycarbonate plastic used to make food and beverage containers to canned food liners and thermal cash register receipts

Many studies have examined how BPA enters the human body, what it does once it’s inside us, and the possible impact of exposure. Research shows that BPA behaves like a human hormone once in the body. At high exposures BPA can potentially effect the liver and kidneys, and it may possibly affect reproductive, nervous, immune, metabolic and cardiovascular systems. At low exposures, most experts, but not all, say the studies show the material to be acceptably safe.

It is this uncertainty that has led – in part – to BPA being removed from many products and to the subsequent emergence of the “BPA-free” label. This may sound like good news for consumers looking to avoid potentially harmful exposures. Yet, what many consumers may not realize is that, in most cases, if you take out BPA, you have to replace it with something else, which might be not safer.

While a “BPA-free” label does say the BPA has been removed, it says nothing about what the BPA has been replaced with. In many cases, this will be a substance that has not been as thoroughly studied as BPA. It might turn out that the substitute chemical is safer, in which case this choice indeed reduces risk. However, because substitute chemicals have not been studied as much, they may present a greater health risk than BPA – a problem often referred to as the “regrettable substitution” problem.

Which brings us to our second question: do “BPA-free” labels influence how people think about risk trade-offs between BPA and non-BPA products? A study we’ve just published in Health, Risk & Society suggests that they do.

In one of our online surveys, we asked participants to read a mock news article about the benefits and risks of eating tomatoes from cans lined with a BPA-based plastic. The article provided a fairly detailed summary of the research on BPA and noted that “it is generally accepted that BPA may slightly raise the risk of certain health problems.” Participants then read a second article about a BPA substitute – polyethylene terephthalate (PET). In contrast to the information about BPA, participants were told that “nothing is known for sure about how PET affects human or animal health”.

The key part of our experimental design was that we varied whether the article referred to canned tomatoes using PET linings as being “BPA-free” or not. Half of participants read materials that always described PET products as being “BPA-free,” while the remaining half read the exact same materials without the “BPA-free” label. We then asked participants about their preferences for tomatoes from cans containing BPA or PET.

Labeling canned tomatoes as “BPA-free” reduced how risky participants thought the non-BPA product was – even after they had been told that little was known about the safety of the substitute material. They were highly interested in having “BPA-free” options and indicated they would be willing to pay on average 28 cents more for a product labeled as “BPA-free”.

When forced to choose between cans with BPA or PET, the proportion of participants selecting PET-lined cans was 20 percentage points greater when those cans were labeled as “BPA-free.” Put simply, the BPA-free label appears to mislead some people into thinking that “free” means “safer” – even when it is explicitly stated that alternative products contain substitute chemicals that are potentially more toxic.

Our study shows that labeling a product as chemical-free reduces how much people consider the risks potentially presented by substitute materials. Any label that describes a product as “free” of something is likely to make it seem less risky. This effect occurs even when consumers are explicitly told that a substitute chemical is present and even when they are told that there is vastly more research on the riskiness of the original chemical (here, BPA) than there is for the substitute.

Our study sheds new light on how people respond to different types of uncertainty. When people face choices between well-studied but still controversial substances and poorly studied substitutes, their choices can be easily changed by a simple label or by changing the order in which people learn about their options. As a result, our study strongly suggests that care needs to be taken in how evidence and risk are communicated to the public about BPA or any other substance where there is some element or doubt over risk and safety.

This is not a trivial issue. Consumer reaction to “BPA-free” and similar labels may in some cases cause people to make riskier decisions, decisions that feel safer but actually expose them to agents which may ultimately be more toxic.

“BPA-free” labels don’t make it easier for consumers to make reasoned choices. They lead people to substitute unconscious assumptions about safety and benefit for reasoned consideration of what is known or not known about different chemicals and products. And that is truly a regrettable substitution.

This article was originally published on

. It is reprinted here with added cross heads for ease of reading. Read the original article.