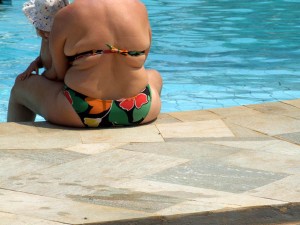 We are swimming in a sea of man-made chemicals that may be causing us to gain weight [Image: xenia.antunes - Morguefile]

Programmed to be Fat?

Are we fat because of man-made chemicals? That is what a new documentary, screened last night on Canadian television, asked.

The programme, which has gained attention across the globe, is part of environmentalist David Suzuki’s The Nature of Things  series. It looked at the scientific evidence showing that chemicals in the environment may be programming us to be fat. And this programming begins before we’re even born.

It’s true that, as a society, we eat too much and don’t exercise enough. But scientists around the globe have begun looking beyond the obvious causes, in part because of weight changes in a group that can’t chew, let alone jog: babies.

It begins in the womb

Infant obesity has risen more than 70% in just 20 years. You can’t blame babies for unhealthy lifestyles or not going to the gym often enough.  The scientists suspect that, starting in the womb, man-made chemicals may be triggering changes to our metabolism that result in life-long weight gain.

The documentary, Programmed to be Fat?, tells the stories of three scientists whose unexpected findings led them to follow the research of Paula Baillie Hamilton, a curious doctor in Scotland, baffled by her own inability to lose weight.

For three years she pored over existing research on environmental chemicals and finally published a key study in the Journal of Alternative and Complementary Medicine in 2002, linking endocrine-disrupting chemicals to the obesity epidemic.

The scientists came across the paper while puzzling over their own research results.  None of their studies were about fat, but they had two things in common – they were all researching endocrine-disrupting chemicals, and they all ended up with unusually heavy lab animals.

Endocrine disruptors are all around us – in plastic, in cans, in the water we drink, in the food we eat and the cosmetics we use.  They’re not supposed to be in our bodies, but they are there just the same. And if the science is correct, the implications for human health are profound.

Now,  scientists are going beyond animal research to human population studies, testing the theory that fetal exposure to man-made chemicals is a key reason for our global obesity epidemic.

The idea that chemicals can make us fat may sound strange, especially since most of us have been brought up on a calories-in/calories-out approach to weight control. But in spite of the fact that the media continue to categorise the finding that something other than food could influence weight gain as ‘new’ and  ‘controversial’, the science is copious and compelling and as Dr Baillie Hamilton’s own research shows, goes back many years.

It also goes beyond just exposure to chemicals. In 2006 NYR Natural News Editor Pat Thomas produced an in-depth investigation into the chemical link to weight gain for the Ecologist magazine. This was followed in 2008 by the book The 21st Century is Making You Fat.

The book broadened the scope of the problem beyond chemicals and into other aspects of modern life that work synergistically to make gaining weight easy and losing it hard. These include exposure to environmental chemicals lack of sleep in a 24/7 culture, the huge number of pharmaceuticals we take, the rise of allergies and stress. It also took into accounted the pervasive influence of the diet industry a multibillion pound moneyspinner that encourages unhealthy yo-yo dieting – which has been shown to encourage rebound weight gain.

Globally the prevalence of overweight and obesity has increased steadily since 1970. The World Health Organization has declared overweight as one of the top 10 health risks in the world and one of the top five in developed nations.

According to recent estimates, some 7% of the global adult population is clinically obese, the number of  people globally who are overweight – estimated to be 1 billion – now equal the number who are starving.

Obesity has serious long-term consequences for health.  While it is not an immediately lethal disease itself, obesity plays a role in triggering or worsening a number of chronic, sometimes serious diseases and conditions Including hypertension, high cholesterol, heart disease, type 2 diabetes, gall bladder disease, asthma, mental health concerns (e.g. depression and low self esteem), and joint and bone disorders.

Says Thomas, “To even ask the question why do we gain weight may seem ridiculous. Everyone knows we gain weight because we eat too much. It’s a simple equation, isn’t it? So simple in fact that people who fail for one reason or another to lose weight must either be greedy or lazy or a diet cheater.

“But the scientific fact is diet regimes have a shockingly high failure rate. In fact, depending upon how one reads the medical literature, conventional medical diet strategies have a success rate of only between 3 and 7%.

“Do the math. This means that conventional weight loss strategies have a failure rate of between 93 and 97 %. Surely, there is something more complex to the current epidemic of obesity than simply eating too much, or not exercising enough.”

In her book Thomas lists a number of ‘chemical calories’ that we all need to watch out for. These are:

An oestrogen mimic used to make clear, hard, reusable plastic products; it is also used in the manufacture of polymers, fungicides, antioxidants, dyes, polyester resins, flame-retardants and rubber chemicals, and some dental resins.

This group includes the pesticides DDT, chlordane, aldrin, dieldrin and heptachlor and the now banned industrial lubricants PCBs, as well as dioxins and chlorophenols. High levels of organochlorines have been found to alter metabolism in the body and essentially stop us losing fat.

Organophosphate pesticides, such as malathion, dursban, diazinon and carbonates, constitute 40% of all pesticides used. These chemicals are mainly utilised inside buildings, as opposed to in agriculture. They are neurotoxic (harmful to nerve tissue) and hormone-disrupting.

These hormone-disrupting chemicals are produced in large volumes and are commonly detected in ground water, rivers and drinking water, as well as in meat and dairy products. Around 95% of phthalate production over the last few decades has been tied to the PVC industry. Phthalates can be found in many plastics and consumer products – everything from hair spray and nail varnish to plastic water bottles and T-shirts.

These are added to many products, including computers, TVs and household textiles to reduce fire risk. They are also found in baby mattresses, foam mattresses, car seats and PVC products. Office workers who use computers, hospital cleaners and workers in electronics-dismantling plants are at particular risk from these chemicals. Polybrominated flame-retardants are estrogen mimics and can also affect the thyroid.

Including aldicarb, bendiocarb, carbaryl, propoxur and thiophanate methyl, carbamates are used extensively in agriculture, forestry and gardening. They are suspected hormone-disrupters.

This group includes tributyltin (TBT) and the mono- and dibutyltins (MBT, DBT). These chemicals have many applications, including as stabilisers in PVC and catalysts in chemical reactions. They are also found in glass coatings, agricultural pesticides, marine anti-foulant paints and wood treatments and preservatives. Organotins are damaging to the thyroid and immune system and potential hormone-disrupters.

A common food pollutant that belongs to a family of chemicals known as polycyclic aromatic hydrocarbons (PAHs). It is derived from coal tar and enters the atmosphere as a result of incomplete combustion of fossil fuels. In animals it has been shown to cause weight gain in the absence of any detectable change in food intake. It is possible that other PAHs may have a similar effect.

This is principally used as a protective plating for steel, in electrode material in nickel-cadmium batteries and as a component of various alloys. It is also present in phosphate fertilisers, fungicides and pesticides. Cadmium in the soil is taken up through the roots of plants and distributed to edible leaves, fruits and seeds and is eventually passed on to humans and other animals, where it can build up in milk and fatty tissues. Cadmium is neurotoxic and a potential hormone-disrupter.

Professions that put their employees at risk of exposure to this neurotoxin include lead-smelting, -refining and -manufacturing industries, brass/bronze foundries, the rubber and plastics industries, steel-welding and -cutting operations, and battery manufacturing plants. Construction workers and people who work in municipal waste incinerators, in the pottery and ceramics industries, radiator-repair shops and other industries that use lead solder may also be among high-exposure groups.

Conventional science, as Programmed to be Fat shows, is slowly catching on to the notion of chemical calories. A few years ago a groundbreaking review by a panel of eminent scientists was also published in the International Journal of Obesity  that attempted to explore the ‘roads less travelled’ in obesity research and suggested at least ten additional factors for obesity that have nothing to do with the usual sins of gluttony and sloth.

The authors concluded that the tendency to focus on calories and exercise (what they called the ‘Big Two’) as the sole cause of obesity, has:

“…created a hegemony whereby the importance of the Big Two is accepted as established and other putative factors are not seriously explored. The results may be well intentioned, but ill-founded, proposals for reducing obesity.”

Their conclusion was that the influence of the Big Two on the global obesity epidemic is “largely circumstantial” relying as it does on broad surveys rather than ‘large randomised studies.

In an effort to broaden the debate, the authors suggested that since being overweight or obese was a modern problem perhaps it causes  also had their roots in some aspects of modern life.

And this was borne out by their comparative review of the available research that pointed to toxic chemicals, sleep debt, medication and even air conditioning, as possible contributors. Their conclusion was that even if some of these causes have only a small effect, they may interact with each other and with other factors in ways that greatly magnify their individual effects.

In a recent interview in the Ecologist Paul Baillie Hamilton noted: “The powers that be need to wake up to the fact of what the worst chemicals are, the scale of the problem out there, the level of contamination in food, water and household products, and different chemicals in the carpet that have been banned in other countries but are used here.”

In the meantime investigations like Programmed to be Fat? help to get the debate out in the open and one day this may well lead to more effective ways of tackling weight gain than the misery of trying to starve and punish ourselves for failing at something that may no longer be entirely within our control.

We are swimming in a sea of man-made chemicals that may be causing us to gain weight [Image: xenia.antunes - Morguefile]