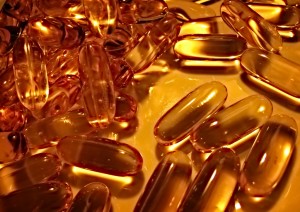 Natural Health News — Men who ate a low-fat diet with fish oil supplements for four to six weeks before having their prostate removed had slower cancer-cell growth in their prostate tissue than men who ate a traditional, high-fat Western diet, according to a new study.

The researchers at University of California at  Los Angeles’ Jonsson Comprehensive Cancer Center also found a beneficial change in the composition of cell membranes in both healthy cells and cancer cells in the prostates of men on the low-fat, fish oil-supplement diet.

The small, short-term study included 48 men. It found that while blood samples from patients after the low-fat, fish oil diet showed slowed growth of prostate cancer cells in a test tube, blood from men eating a typical Western diet did not slow cancer growth.

With the low-fat diet, 15% of the calories from fat. Additionally, the men on this diet took five grams of fish oil per day in five capsules, three with breakfast and two with dinner, to provide omega-3 fatty acids. Omega-3 fatty acids have been found to reduce the incidence of heart disease and to fight inflammation, which has been associated with certain cancers.

With the study’s Western diet, 40% of the calories came from fat, which is generally equivalent to what many Americans consume today. The fat sources also were typical of the American diet and included high levels of omega-6 fatty acids from corn oil and low levels of fish oil that provides omega-3 fatty acids.

“The finding that the low-fat, fish oil diet reduced the number of rapidly dividing cells in the prostate cancer tissue is important because the rate at which the cells are dividing can be predictive of future cancer progression,” Dr William Aronson, lead researcher on the study said. “The lower the rate of proliferation, the lesser the chances that the cancer will spread outside the prostate, where it is much harder to treat.”

The findings of the study, are published in Cancer Prevention Research, a peer-reviewed journal of the American Association for Cancer Research and according to Dr Aronson, validate those of previous studies.

He also noted that the healthy diet raised levels of omega-3 fatty acids from fish oils while decreasing levels of omega-6 from corn oil and speculated that this might directly affected the biology of the cancer cells, though added that further study was needed to confirm this.

“You truly are what you eat,” said Aronson, “We are extremely pleased about our findings, which suggest that by altering the diet, we may favourably affect the biology of prostate cancer.”

The researchers now hope to conduct a larger study to confirm their findings.