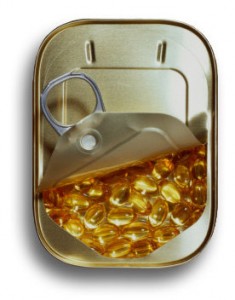 A low fat diet supplemented with fish oil could lower inflammation and slow the progression of prostate cancer, say US researchers

Natural Health News — Men with prostate cancer could help slow the growth of cancer cells if they eat a low-fat diet and take fish oil supplements, new research has shown.

Compared to a traditional, high-fat Western diet,  a healthier lower fat diet appeared to change the composition of their cell membranes in both the healthy cells and the cancer cells in the prostate.  The men also had lower levels of pro-inflammatory substances in their blood and a lower ‘cell cycle progression’ (CCP, an indication of how aggressively a cancer may spread), say researchers at the University of California Los Angeles (UCLA).

This study appears in the early online edition of Cancer Prevention Research and follows a 2011 study by Aronson and his team that found a low-fat diet with fish oil supplements eaten for 4-6 weeks prior to prostate removal slowed the growth of cancer cells in human prostate cancer tissue compared to a traditional, high-fat Western diet.

That short-term study also found that the men on the low-fat fish oil diet were able to change the composition of their cell membranes in both the healthy cells and the cancer cells in the prostate. They had increased levels of omega-3 fatty acids from fish oil and decreased levels of the more pro-inflammatory omega-6 fatty acids from corn oil in the cell membranes, which may directly affect the biology of the cells, Aronson said.

“These studies are showing that, in men with prostate cancer, you really are what you eat,” said study lead author William Aronson, a clinical professor of urology at UCLA and chief of urologic oncology at the West Los Angeles Veterans Affairs Medical Center. “The studies suggest that by altering the diet, we may favorably affect the biology of prostate cancer.”

The men in the previous study were placed into one of two groups, the low-fat fish oil diet or the Western diet. The Western diet consisted of 40% of calories from fat, generally equivalent to what many Americans consume today. The fat sources also were typical of the American diet and included high levels of omega-6 fatty acids from corn oil and low levels of fish oil that provide omega-3 fatty acids.

The low-fat diet consisted of 15% of calories from fat. Additionally, the men on this diet took 5g of fish oil per day in five capsules, three with breakfast and two with dinner, to provide omega-3 fatty acids. Omega-3 fatty acids have been found to reduce inflammation, and may be protective for other malignancies.

For this study, the research team wanted to look at the potential biological mechanisms at work in the low-fat fish oil diet that may be providing protection against cancer growth and spread. They measured levels of the pro-inflammatory substances in the blood and examined the prostate cancer tissue to determine the CCP score.

“This is of great interest, as the CCP score in prostate cancer is known to be associated with more aggressive disease and can help predict which patients will recur and potentially die from their cancer,” Aronson said.

Further, Aronson and his team analyzed one pro-inflammatory substance called leukotriene B4 (LTB4) and found that men with lower blood levels of LTB4 after the diet also had lower CCP scores.

Further studies are planned to determine the importance of this novel receptor in prostate cancer progression.

A low fat diet supplemented with fish oil could lower inflammation and slow the progression of prostate cancer, say US researchers