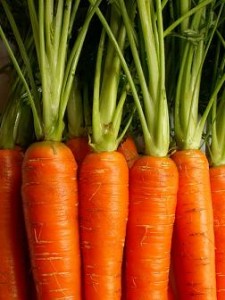 Can vitamin A stop cancer before it starts?

Natural Health News — A derivative of vitamin A, known as retinoic acid, found abundantly in sweet potato and carrots, helps turn pre-cancer cells back to normal healthy breast cells, according to new research.

The research, published in the International Journal of Oncology,could help explain why some clinical studies have been unable to see a benefit of vitamin A on cancer. According to the researchers  the vitamin doesn’t appear to change the course of full-blown cancer, only pre-cancerous cells, and only works at a very narrow dose.

When the researchers exposed the four breast cell types to different concentrations of retinoic acid – one of the chemicals that the body converts vitamin A into – they noticed a strong change in the pre-cancerous cells.

Not only did the pre-cancerous cells begin to look more like normal cells in terms of their shape, they also changed their genetic signature back to normal. The pre-cancerous cells had 443 genes that were either up- or down-regulated on their way to becoming cancerous. All of these genes returned to normal levels after treatment with retinoic acid.

“We were able to see this effect of retinoic acid because we were looking at four distinct stages of breast cancer,” says Dr. Fernandez. “It will be interesting to see if these results can be applied to patients.”

Interestingly, the cells that were considered fully cancerous did not respond at all to retinoic acid, suggesting that there may be a small window of opportunity for retinoic acid to be helpful in preventing cancer progression. In addition, the researchers showed that only one concentration of retinoic acid (about 1 micromolar) produced the anti-cancer effects. Lower concentrations gave no change, and higher concentrations produced a smaller effect.

The next step will be to try to learn whether the amount of retinoic acid required can be maintained in an animal model, and if that concentration will have the same effects as observed in the cells in the laboratory. If those studies show the same effect, the next step would be to test whether these benefits also hold true in humans.

What we call vitamin A is made up of a mixture of molecules called retinoids. Retinoic acid produced in the body from retinal, which is one of the retinoid compounds of vitamin A.

Retinoids have long been in the spotlight as potential anti-cancer and anti-aging compounds. You can take them as supplements in both natural and synthetic forms, getting essential nutrients like vitamin A through your diet is probably the best way to get what your body needs.

Carotenoids, such as beta-carotene, can be converted into retinoids by the body. Good vegetable sources include red and orange vegetables and fruits such as sweet potatoes, squash, carrots, pumpkins, cantaloupes, apricots, peaches and mangoes.