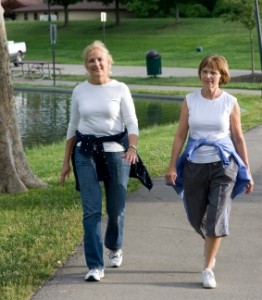 Don't call it 'exercise'. Call it 'fun' instead and you'll eat less afterwards

Call it ‘fun’ instead of ‘exercise’ and you’ll eat less afterwards!

Natural Health News — Think of your next exercise workout as a ‘fun run’ or as a well-deserved break, and you’ll eat less afterward. But think of it as exercise or as a workout and you’ll later eat more dessert and snacks to reward yourself.

That’s the conclusion of two new studies from Cornell University. the studies involved adults who were led on a 2 km walk around a small lake and were either told it was going to be an exercise walk or a scenic walk.

In the second study, 46 adults were given mid-afternoon snacks after their walk. Those thinking they taken an exercise walk ate 206 more calories of M&Ms, which was over twice as much – 124% more – than those who had been told they were on a scenic walk.

Together, these studies point to one reason why people in exercise programs often find themselves gaining weight. According to Werle, the notion is that “some exercisers have a tendency to reward themselves by overeating after their workout. ”

For beginning or veteran exercisers, the bottom line is this: “Do whatever you can to make your workout fun. Play music, watch a video, or simply be grateful that you’re working out instead of working in the office,” said co-author Brian Wansink, author and Director of the Cornell Food and Brand Lab.

“Anything that brings a smile, is likely to get you to eat less,” he added.

These findings support the previous work on this issue by the Cornell scientists.

Don't call it 'exercise'. Call it 'fun' instead and you'll eat less afterwards