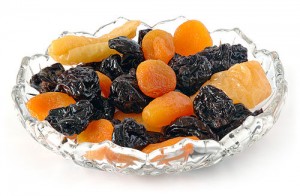 A diet high in  legumes, brown rice, cooked green vegetables and dried fruit can significantly protect against colon polyps – and this in turn may reduce the risk of colon cancer.

In particular researchers at Loma Linda University found that legumes at least three times a week and brown rice at least once a week was linked to a reduced risk of colon polyps by 33% and 40% respectively.

The data, published in the journal Nutrition and Cancer, comes from a 26-year long study of the eating habits of 2,818 people as part of the ongoing Adventist Health Study.

Colon cancer is the second leading cause of cancer death in the United States. It is the second most common cause of death from cancer in the UK, after lung cancer (according to Cancer Research UK).

The protective effects of these foods could be due in part to their cancer-fighting agents, the study reported. “Legumes, dried fruits, and brown rice all have a high content of fiber, known to dilute potential carcinogens,” said Dr. Tantamango one of the authors of the study. “Additionally, cruciferous vegetables, such as broccoli, contain detoxifying compounds, which would improve their protective function.”

Dr Tantamango also noted that recent studies have shown that high meat intake is associated with an increased risk of colon cancer, eating legumes with meat may have some protective effect. Besides their fiber content, there may be something else present in legumes that provides a protective effect.

He notes there is a need for future studies to examine foods shown to reduce the risk of colon polyps, since it is possible that interactions between various nutrients with anti-cancerous properties will be better able to explain these findings.