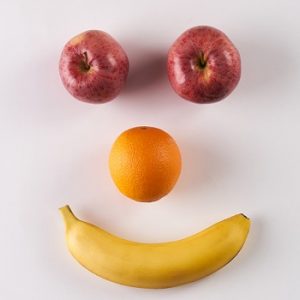 Happiness and mental health are highest among people who eat seven servings of fruit and vegetables a day. [Photo: Bigstock]

Natural Health News — Happiness and mental health are highest among people who eat seven servings of fruit and vegetables a day, according to a new study.

That’s the opinion of economists and public health researchers from the University of Warwick in the UK and at and Dartmouth University in the US who studied the eating habits of 80,000 people in Britain. Their research found that mental well-being – happiness – appeared to rise with the number of daily servings of fruit and vegetables people consumed.

A “serving” in the study was 80g (2 ½ oz) portion, equivalent to a small banana, a small apple or a single carrot.

Well-being peaked at seven servings a day, the researchers noted in the study which will appear in journal Social Indicators Research, adding that most of us don’t eat anywhere near that amount.

Most don’t get enough

The UK’s Department of Health has spent at least £4million on its ‘five a day’ advertising campaign since it was launched in 2003. And yet today, 25% of the population eat just one serving or no servings of fruit or vegetables each day. Only a tenth of the British population consume the magic number of seven or more daily servings, according to the researchers.

The average American gets a total of just three servings of fruits and vegetables a day.

Lead researcher, economist Dr. Andrew Oswald, said he was keen to follow the results of the study and had already decided “it is prudent to eat more fruit and vegetables. I am keen to stay cheery.”

Co-author Sarah Stewart-Brown, MD, professor of public health, was more cautious saying said she wanted to understand more about why eating more fruit and vegetables made people happy “The statistical power of fruit and vegetables was a surprise. Diet has traditionally been ignored by well-being researchers”

Although it seems a strange thing to say, given that health and well-being are so inexorably tied together, from a research perspective there is remarkably scant research on the link between emotional well being and food choices in the general population.

The research that does exist, often uses food as a kind of emergency intervention, for instance to treat depression. Much of what we know about ‘mood foods‘ is culled from this research. Likewise we know that eating junk food can cause depression, but research on the emotional benefits of a healthy diet  has been ignored.

Equally interesting is how studies like this stir up already muddy waters about how much fruit and vegetables each day is optimal for health and well-being.

In some – but not all – countries governments recommend five servings a day of fruits and vegetables to promote a healthy lifestyle. Although the five-a-day mantra seems to have been with us forever, it is really relatively recent, having been established in 1991. That advice has its roots in World Health Organization guidelines to include 14oz of vegetables in a daily diet.

In an hilarious and eye opening assessment  of how – and why – different countries have interpreted this advice, nutritionist Zoe Harcombe’s notes that the UK, Switzerland, Belgium and Austria recommend five-a-day, the US nine-a-day, the Danes six-a-day, the Irish four(plus)-a-day, Italy and Spain are less directive suggesting that citizens just “eat more” .

Dig a bit deeper and you find that the French are told to eat ten-a-day, the Canadians between-five-and-ten-a-day, and the Japanese more precisely 13 portions of vegetables and four pieces of fruit. In the US the dietary guidelines call for five-to-thirteen-a-day (2½ to 6½ cups) of fruit and vegetables, depending on one’s caloric intake.

The need for balance

To get the best out of fruits and vegetables they need to be balanced by other foods. We need fats in our diet, for example, to absorb the fat-soluble nutrients in fresh produce – thus the advice to add oily dressing to salads. We also need protein, in whatever form we wish to take it.

From an aesthetic point of view we also need a balance of tastes, sweet, sour, bitter, salty and savoury and colours to be satisfied.  It could also be argued that by eating seasonally we gain more satisfaction from food because we are aligning our bodies, in a very ancient way, with what is appropriate to the time of year (in addition to eating more sustainably).

Most of us just want to eat a balanced diet.  Wouldn’t it be a revelation if there could be some global agreement between so-called ‘experts’ on what that actually means!?

Happiness and mental health are highest among people who eat seven servings of fruit and vegetables a day. [Photo: Bigstock]