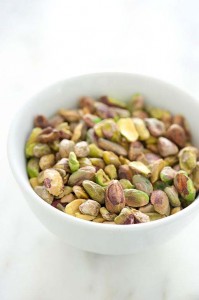 Pistachio nuts are very high in the mineral potassium which has been show to lower blood pressure [Image: Jules/Stonesoup - Wikimedia Commons]

If you are suffering from mild to moderate high blood pressure there are some very effective dietary regimes that can help lower blood pressure.

Amongst them is the DASH (Dietary Approaches to Stop Hypertension) Diet which is low in fat and meat and high in fresh fruits and vegetables.

One advantage of including more fruit and vegetables in your daily diet is that you are more likely to be eating a lower calorie but nutrient dense diet and in particular you may be getting more potassium.

Numerous studies have shown that consuming potassium through foods and/or supplements will lower blood pressure. Nearly 20 years ago a large study involving 30,000 male health professionals found that individuals who ate less than 2.4 g of potassium a day had a 50% higher risk for high blood pressure than those who ingested at least 3.6 grams of potassium a day.

Then again in 2009, a study in the Archives of Internal Medicine found that the most effective way to battle high blood pressure is to boost potassium intake while limiting sodium intake. This multiple-year research project tracked almost 3,000 participants, who completed questionnaires and provided urine samples.

This finding was confirmed in a 2011 study, suggesting it is important to get the sodium/potassium balance right in our diets. The easy way to do this is to avoid processed foods, which are very high in processed salt and low in potassium and other essential nutrients in favour of a whole food diet based on unprocessed foods. This type of diet will naturally provide much larger amounts of potassium in relation to sodium, as this chart illustrates.

Including more potassium rich foods in your diet is fairly simple and probably healthier than trying to adjust your potassium intake with supplements. The tables below show the foods that are highest in potassium per 100g (3½ oz) serving:

Other foods that may help lower blood pressure include:

This popular cooking ingredient has been shown to thin the blood and raise levels of ‘good’ HDL cholesterol while lowering ‘bad’ LDL cholesterol and triglycerides (blood fats) thus making it useful in the treatment of heart disease and stroke. This effect can also impact blood pressure.

In 2008, researchers from Australia released findings from a meta-analysis – a type of data review where researchers look at existing high quality trials – showing that garlic supplements reduced high blood pressure as much as prescriptions called beta blockers. Overall those taking a daily dose garlic supplement ranging from 600mg to 900mg experienced significant reductions.

On average their systolic (top) number dropped 8.4mm Hg and their diastolic (bottom) reading fell by 7.3mm Hg. The amount of supplement provided to study participants is similar to one clove of garlic.

There have been several studies linking dark chocolate to lower blood pressure. In 2010 a meta-analysis found that chocolate with around 50-70% cocoa solids was better than placebo at lowering blood pressure.

According to the study there was a relatively modest but nevertheless clinically relevant blood pressure-lowering effect of cocoa in people with hypertension: a decline of 5 mmHg in systolic blood pressure. Across the board such a reduction could reduce the risk of a cardiovascular event by about 20% over 5 years.What is more, the effect was comparable to other lifestyle modifications, such as moderate physical activity (30 minutes a day) may reduce systolic BP by 4-9 mmHg.

Chocolate’s benefits may come from its flavonol content; a 40g (1¼ oz) serving of dark chocolate contains the same amount of antioxidants as a glass of red wine. Other studies have shown heart healthy effects of dark chocolate.

A 2004 study published in the Journal of Clinical Nutrition illustrated the effectiveness of pomegranate juice in lowering blood pressure. In this research project, patients with severe cartoid artery blockages drank an ounce of pomegranate juice daily for a year and experienced a 20% drop in their blood pressure readings. They also had a 30 percent decrease in the amount of plaque in their arteries.

A 2011 study at Queen Margaret University in Edinburgh also found that pomegranate juice lowered blood pressure. When shopping for pomegranate juice, look for a juice without fillers or sweeteners.

AGE compounds are known to activate the immune system, resulting in the inflammation and tissue damage associated with ageing and diabetes. They also aggravate atherosclerosis, which produces cholesterol plaques.

Herbs and spices have virtually no calories so if you keep a good variety in your cupboard and season your food liberally, you could double or even triple the medicinal value of your meal without increasing it’s caloric content!

Pistachio nuts are very high in the mineral potassium which has been show to lower blood pressure [Image: Jules/Stonesoup - Wikimedia Commons]