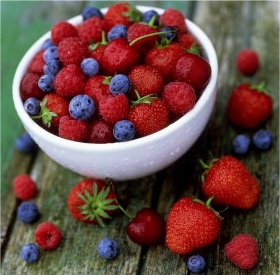 Natural Health News — A new study has shown that women who ate at least three servings of blueberries and strawberries per week had fewer heart attacks.

Writing in the journal Circulation the researchers conclude that eEating three or more servings of blueberries and strawberries per week may help women reduce their risk of a heart attack by as much as one-third.

A specific sub-class of flavonoids, called anthocyanins, may help dilate arteries, counter the buildup of plaque and provide other cardiovascular benefits, according to the study.

Scientists from the Harvard School of Public Health in the US and the University of East Anglia, UK followed 93,600 women, aged 25 to 42, as part of the ongoing Nurses’ Health Study II. The women completed questionnaires about their diet every four years for 18 years.

The protective effect of the berries held true even in comparison to women who otherwise ate a diet rich in other fruits and vegetables. The findings were also independent of other risk factors, such as age, high blood pressure, family history of heart attack, body mass, exercise, smoking, caffeine or alcohol intake.

“We have shown that even at an early age, eating more of these fruits may reduce risk of a heart attack later in life,” said Aedín Cassidy, Ph.D., lead author and head of the Department of Nutrition at Norwich Medical School of the University of East Anglia in Norwich, United Kingdom.

“Blueberries and strawberries can easily be incorporated into what women eat every week,” added Eric Rimm D.Sc., senior author and Associate Professor of Nutrition and Epidemiology at the Harvard School of Public Health in Boston, Mass. “This simple dietary change could have a significant impact on prevention efforts.”

Blueberries and strawberries were part of this analysis simply because they are the most-eaten berries in the United States. It is possible, say the researchers, that other anthocyanin-rich foods could produce the same results.