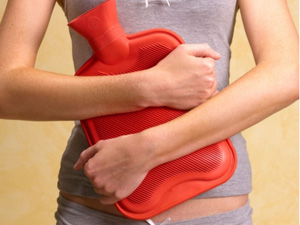 Around 40% of menstruating women experience PMS. The most common symptoms are: irritability, anxiety, depression, headache, bloating, fatigue or excessive tiredness, feelings of hostility and anger, and food cravings, especially for chocolate or sweet and salty foods. These usually start one to two weeks before menstruation and go away after their periods start.

In the recent study in the American Journal of Epidemiology, researchers analysed data on women from the Nurses’ Health Study II – an ongoing research project that includes health data on 116,686 women.

At the beginning of the study, none of the participants reported having PMS symptoms. After 10 years, the researchers identified 1,057 women with PMS and 1,968 without. Data on iron intake and other minerals was collected through questionnaires throughout the study.

The researchers found, after taking into account other factors including calcium intake (which can interfere with iron absorption), that women with the highest nonheme iron intake had a 36% reduced risk of developing PMS when compared to those with the lowest intake.

Conversely, high potassium intake was linked to a 46% increased risk for PMS. Significant links with other nutrients such as magnesium, manganese and sodium consumption were lacking in this study.

The authors concluded that paying attention to mineral intake may be helpful in preventing PMS.

Iron is an essential mineral and an important component of proteins involved in oxygen transport and metabolism. Iron is also essential in the synthesis of neurotransmitters such as dopamine, norepinephrine and serotonin. Approximately 15% of the body’s iron is stored for future needs and mobilized when dietary intake is inadequate. The body usually maintains normal iron status by controlling the amount of iron absorbed from food.

There are two forms of dietary iron: heme and nonheme. Sources of heme iron include meat, fish and poultry. Sources of nonheme iron, which is not absorbed as well as heme iron, include beans, lentils, flours, cereals and grain products. This latest study suggests that including more from this latter category can be part of a healthy eating plan to avoid PMS.

In addition to iron, supplements such as evening primrose oil and vitamin B6 have been reported to improve symptoms of PMS such as mastalgia (breast pain or tenderness) and PMS-related depression or anxiety in some women. Additionally, there is some evidence that ginkgo biloba may relieve PMS-associated symptoms, including emotional upset.