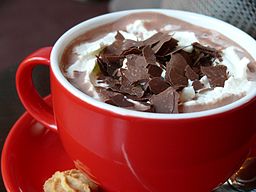 Chocolate is rich in antioxidant flavonols that can help improve brain function - just watch out for the sugar! [Image: Itisdacurlz - Wikimedia Commons]

Previous research has found the brain is more active if it gets an adequate supply of oxygen and sugar from the blood, the researchers wrote in the journal Neurology.

Among people with certain diseases that affect blood vessels – such as high blood pressure and diabetes – blood flow to the brain may be impaired.

The small study involved 60 people with an average age of 73 who did not have dementia aimed to explore whether drinking hot chocolate rich in antioxidant flavanols could improve thinking skills in those people. The participants drank two cups of hot cocoa per day for 30 days and did not consume any other chocolate during the study.

They were given tests of memory and thinking skills. They also had ultrasounds tests to measure the amount of blood flow to the brain during the tests.

“We’re learning more about blood flow in the brain and its effect on thinking skills,” said study author Farzaneh A. Sorond, MD, PhD, of Harvard Medical School in Boston and a member of the American Academy of Neurology.

“As different areas of the brain need more energy to complete their tasks, they also need greater blood flow. This relationship, called neurovascular coupling, may play an important role in diseases such as Alzheimer’s.”

Of the 60 participants, 18 had impaired blood flow at the start of the study. Those people had an 8.3% improvement in the blood flow to the working areas of the brain by the end of the study, while there was no improvement for those who started out with regular blood flow.

The study was supported by the National Institute on Aging and the National Heart, Lung, and Blood Institute. The cocoa was provided by Mars Inc.

The best way to ensure you are getting all the antioxidants you can from a cup of cocoa is to use a 70% (or higher) cocoa mass bar of organic dark chocolate as your starting point. Using organic avoids pesticide residues and GMOs in the form of soya that can sneak their way into the average chocolate bar. Then:

2 Warm gently while stirring the melting chocolate into a smooth paste.

3 Slowly whisk the rest of your cup of milk into the mixture and heat. Add sugar to taste. At this point you can also add cinnamon, cayenne or a pinch of salt or any other spices you may desire.

Many instant hot chocolate mixes can be high in sugar low in cocoa, and the low sugar ones contain undesirable fake sugars like aspartame which are known to be neurotoxic. If you want to use a powder start with an unsweetened 100% organic coca powder and blend this with milk (or nut milks if lactose is a problem) and sweeten to taste.

Chocolate is rich in antioxidant flavonols that can help improve brain function - just watch out for the sugar! [Image: Itisdacurlz - Wikimedia Commons]