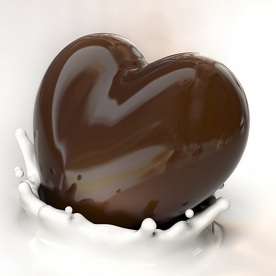 Natural Health News — What are the health benefits of chocolate? It depends on whether you are a man or a woman…

Scientists in Scotland analysed the effects of dark chocolate fortified with extra cocoa on platelets – components of the blood that help stop bleeding. When platelets activate, or become sticky, and then aggregate, or clump together, too readily they can form artery-blocking clots, potentially leading to a heart attack or stroke, so platelet function is an important measure of cardiovascular health.

Healthy men and women were randomly assigned to eat one of three types of chocolate: dark chocolate enriched with extra flavan-3-ols (antioxidant compounds found in cocoa), standard dark chocolate, or white chocolate after a 10-hour fast. Blood and urine tests were conducted two hours before and six hours after eating the chocolate

Boys and girls are different

The results revealed an interesting difference between men and women.

Men who ate the enriched dark chocolate had a significant decrease in both platelet activation and aggregation compared to those who ate standard chocolate.

In women, eating the fortified chocolate only reduced aggregation. In both sexes, bleeding time increased after eating the enriched chocolate, suggesting that it had a blood-thinning effect. The researchers concluded that dark chocolate that’s high in flavan-3-ols has a positive effect on platelet function in both sexes, but the benefits are greater in men.

The study – which comes just in time to make us all feel good about Valentine’s Day indulgence – builds on previous research showing the health benefits of consuming chocolate, particularly dark chocolate and cocoa across a wide range of measurements including heart health and immune function.