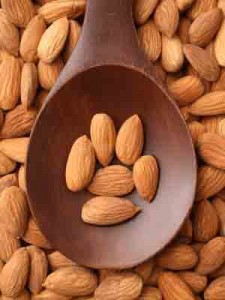 Natural Health News — New research has found that women who snack on almonds in the morning are less likely to overeat at later meals.

In a small study, published in the European Journal of Nutrition, UK researchers tracked the calorie intakes of 32 healthy women and found that those who ate 42g ( 1.5 oz) of almonds as a snack took in significantly fewer calories at lunch and dinner.

As well as monitoring the energy intake over the course of the day, the study also evaluated the participants on their subjective appetite ratings using a visual analogue scale. By asking questions about their feelings of hunger, sensation of being full and desire to eat, the researchers were able to assess the satiation effect of almonds. Satiation is described as the inter meal inhibition of hunger from consuming food, with foods that are low in energy density and high in protein and fibre having significant satiation effects.

Better for heart disease too

The study, albeit funded by the Almond Board of California (roughly 80% of the world’s almonds come from California), is the latest in a long string of research that suggests tree nuts are a healthy snack or food ingredient, providing nutrients and energy as well as preventing or treating obesity by curbing appetites.

That study followed a large-scale review from researchers at Harvard University encompassing 27 studies (16 from North America, 8 from Europe and 3 from Asia) and more than 500,000 adult participants (mean age 53 years) which showed that eating four servings (1 ounce) of nuts and legumes weekly was associated with a 24% lower risk of fatal heart attacks, a 22% lower risk of non-fatal heart attacks and a13% lower risk of diabetes.

A good source of nutrition

Dieticians point to almonds as a nutritional powerhouse, particularly among nuts, although food scientists classify almonds as being more akin to a seed. One serving of almonds has about six grams of protein, four grams of fibre and provides the body with plenty of vitamins and minerals, including magnesium, potassium, and vitamin E.

If almonds are not your favourite nut take heart. Studies show most nuts can aid satiety and therefore weight loss if included as part of a healthy diet.