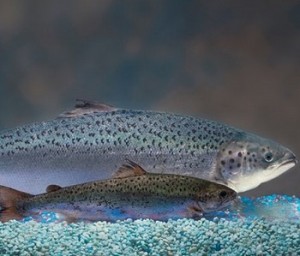 US gives the OK to GMO salmon

Natural Health News — US federal regulators have approved a genetically engineered salmon for sale in US supermrkets, clearing the way for the world’s first GMO animal intended for human consumption.

The AquaAdvantage salmon, which is engineered to grow twice as quickly as a conventional Atlantic salmon, will undoubtedly intensify the battle in the US to get GMO foods labelled since the US Food and Drug Administration (FDA) has determined that the salmon does not require labelling.

» The US Food & Drug Administration has approved a genetically modified salmon for entry into the human food chain. This is the world’s first GMO animal intended for human consumption.

» Activists claim the FDA has ignored important environmental an human health concerns surrounding the salmon.  Amongst these is the fact that the salmon is nutritionally inferior to natural salmon.

» Several US retailers have already said they will not stock the fish.

The salmon has been fiercely opposed by consumer and environmental groups, which have argued that the safety studies were inadequate and that wild salmon populations might be affected if the genetically engineered fish were to escape into the oceans and rivers.

But there are also health implications for any consumer brave enough to eat the fish.

GMO salmon, like most farmed salmon are raised in intensive aquaculture environments (the land equivalent would be the CAFOs that squeeze thousands of cattle into small barren spaces to optimise efficiency).

The type of farming is based on feeding maximum amounts of cheaper, plant-based feeds, especially corn and soya – both of which also tend to be GMOs.

Switching salmon from a wild, fish-based diet which is natural to them, to one with a substantial percentage of calories from plants, changes the nutritional profile of the fish substantially. In particular, this changes the fatty acid profile of the fish (as it has done in meat) so that levels of less healthy omega-6 go up and levels of more healthy omega-3s go down. In some studies levels of other key long-chain polyunsaturated fatty acids (PUFAs) have also been shown to be lower.

According to one report by the Norwegian Network for GMO-free Food  independent studies have shown that traditional non-GMO salmon contains 14% higher rates of beneficial omega fats.

In one  analysis submitted to the FDA by AquaBounty, GMO salmon was shown to have 5% less protein but 58% greater total fat content compared to the non-GMO equivalent.

GMO salmon were also found to have large differences in vitamin, mineral and amino acid levels compared to normal salmon.

The FDA has not acknowledged these facts and in addition has chosen to ignore some other troubling data on human health. For instance GMO salmon has been shown to have 40% higher levels of a hormone called insulin-like growth factor-1, which has been shown to increase the risk of certain cancers.

The fish also has a up to 52% higher levels of “allergenic potency,” which indicates possible allergic reactions from consumers. This is especially relevant in light of evidence that previous studies have also shown that some GMO foods pose an allergy risk to consumers.

Consumers and retailers saying no

It will take some time to for AquaBounty to raise enough of the fish and because of this it is still not clear how soon the salmon could enter the human food chain. Not long after the announcement consumers groups and individuals vowed they would not eat the fish and several US supermarket chains including Safeway, Kroger, Target, Trader Joe’s, Whole Foods and Aldi were among the first retailers to say they would refuse to sell the fish.

Once on the US market there is no trade barrier to selling the salmon in the UK – though by law it would need to be put through an EU approval process and, once on sale, labelled as GMO salmon. Rather than fresh salmon it could likely enter the EU market as smoked salmon or ingredients in pre-prepared foods.

In the mean time, much of the farmed salmon we eat is routinely fed on high protein feed that includes GM ingredients like soya and yeast, in order to make it grow quickly (and, of course, if biotech companies have their way we’ll be feeding GM camelina oil to our GM and non-GM salmon before long).

This fish is not labelled as GM-fed, so consumers are unable to make informed choices about whether they eat it or not.

What can you do?

Take action in every way you can.