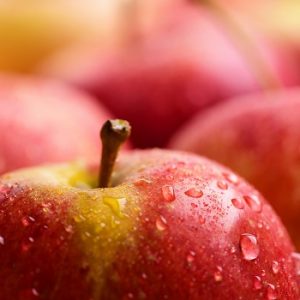 A better way to wash pesticides off your apples

Natural Health News — Polishing an apple on your shirt might remove some dust and dirt, but getting rid of pesticide residues could take a little more work.

Researchers now report that washing apples with a common household product – baking soda – is a better way to get rid of residues on the surfaces of the fruit.

Farmers have long claimed that pesticides can help increase crop yield – a claim debunked by research showing that organic yields are the same and in some cases better than conventional ones.

Moreover many concerns over the human health effects of pesticides in the diet have been raised over the years.

Washing is one strategy to clean some of the pesticide residues off produce, and it is standard practice in the food industry.

But some of the pesticides that get absorbed by fruits and vegetables might not be easily removed using current cleaning methods.

» Apples are treated with many different pesticides and many people wash or polish their apples before eating in order to remove some of the residues.

» A new study tested three washing methods – water, bleach and baking soda, to find out which was mot effective at removing surface residues.

» Immersing apples in a 1% solution of baking soda and water, then rinsing and drying was the most effective method.

» The researchers note, however that this method does not remove pesticides that have been absorbed into the fruit.

So researchers, reporting in the Journal of Agricultural and Food Chemistry, investigated which washing method can most effectively reduce pesticides.

They then washed these apples by immersing them in three different liquids: tap water, a 1% baking soda/water solution, and a US-EPA-approved commercial bleach solution (Chlorox) often used on produce.

The baking soda solution was the most effective at reducing pesticides. After 12 and 15 minutes, 80% of the thiabendazole was removed, and 96% of the phosmet on the surface of the apples was removed. This is because baking soda degrades both thiabendazole and phosmet, making them easier to wash off.

The different percentages are likely due to thiabendezole’s greater absorption into the apple; mapping images showed that thiabendazole had penetrated up to 80 micrometers deep into the apples; phosmet was detected at a depth of only 20 micrometers.

Washing the produce with either plain tap water or the bleach solution for two minutes, per the industry standard, were far less effective.

They also note that none of the treatments was able to remove the pesticides that had been absorbed into the flesh of the apple.