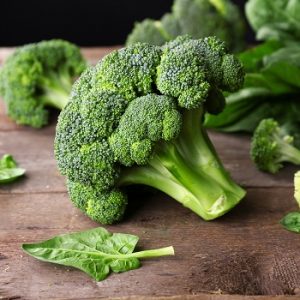 Compounds naturally present in broccoli could help protect the gut from environmental and other toxins that can cause leaky gut. [Photo: Bigstock]

Natural Health News — If you suffer from digestive troubles, adding a bit more broccoli to your diet could help.

“There are a lot of reasons we want to explore helping with gastrointestinal health and one reason is if you have problems, like a leaky gut, and start to suffer inflammation, that may then lead to other conditions, like arthritis and heart disease,” said lead author Gary Perdew, John T. and Paige S. Smith Professor in Agricultural Sciences, Penn State.

“Keeping your gut healthy and making sure you have good barrier functions so you’re not getting this leaky effect would be really big.”

Good intestinal barrier function means that the gastrointestinal tract is helping protect the intestines from toxins and harmful microorganisms, while allowing nutrients to pass into the system, he said.

According to Perdew, the key to the process may be a receptor in the gut called Aryl hydrocarbon receptor, or AHR. The receptor helps the body regulate its reaction to certain environmental contaminants, as well as triggers other responses to toxin exposure.

» A new study has shown that compounds called indole glucosinolates, which are found in broccoli and other cruciferous vegetables can support a healthy gut.

» Specifically they help protect the gut against environmental assaults that can lead to leaky gut.

» The amounts used in the animal study equated to around 3.5 cups of broccoli per day – but the scientist point out that other vegetables like brussles sprouts are higher in these compounds so you could get the same protective effect with less.

The researchers, whose study was published in the Journal of Functional Foods, suggest that cruciferous vegetables – such as broccoli but also brussels sprouts and cabbage – contain an organic chemical compound called indole glucosinolates, which breaks down into other compounds, including indolocarbazole (ICZ) in the stomach.

When ICZ binds to and activates the Aryl hydrocarbon receptor (AHR) in the intestinal lining, it aids in maintaining a healthy balance in the gut flora and immune surveillance, and enhances host barrier function. This may help prevent diseases, such as various cancers and Crohn’s Disease, caused by inflammation in the lining of the gut.

According to Perdew, hyper-activating the AHR can cause toxicity, but using broccoli to activate the receptor locally – in the gut – rather than systemically with drugs or environmental toxins might help avoid some of these problems.

“Dioxin, for example, activates this receptor, and if you hyper-activate it with dioxin, it will cause toxicity,” said Perdew. “What we were interested in is: Could you locally activate the receptor naturally at a level that would cause only modest AHR activation in the gut, but not cause systemic activation, which could possibly lead to negative effects?”

The researchers used an animal model to try and answer this question. They added 15% broccoli to the diets of half of a group of mice. Then the animals were all given a chemical to induce digestive problems. The mice getting the broccoli were protected but the mice that didn’t get the broccoli were not.

Getting what you need

For humans, the amount in the experiment would be equivalent to eating about 3.5 cups of broccoli each day, according to Perdew. “Now, three and a half cups is a lot, but it’s not a huge amount, really,” said Perdew. “We used a cultivar – or variety – with about half the amount of this chemical [indole glucosinolates] in it, and there are cultivars with twice as much. Also, brussels sprouts have three times as much, which would mean a cup of brussels sprouts could get us to the same level.”

Because people with certain digestive conditions, such as colitis, are often warned to avoid too much roughage in their diets, future research may include determining the best ways for people to consume the broccoli – or other vegetables with similar effects – to receive the same health benefits, without causing any other associated digestive problems from the fibrous vegetables.

We would add that broccoli sprouts are an exceptionally rich source of these compounds and that a daily shot of broccoli sprout juice is a good way to get what you need.

Compounds naturally present in broccoli could help protect the gut from environmental and other toxins that can cause leaky gut. [Photo: Bigstock]