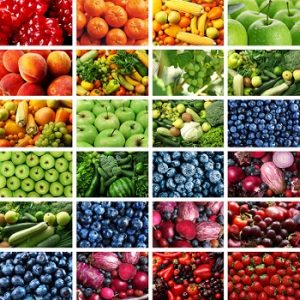 Eating a rainbow of foods is the best way to support gut health, and therefore the health of the whole body. [Photo: Bigstock]

Natural Health News — The advice to ‘eat a rainbow’ brings with it a multitude of health benefits. Now, according to Spanish researchers, we can add good gut health to these.

Their beneficial properties are dependent on their bioavailability, which is low compared to micro and macronutrients

So the first thing the research group from Instituto de Salud Carlos III, Madrid, Spain, looked at was the bioavailability of polyphenols and their impact on the human body.

“The bioavailability and effects of polyphenols greatly depend on their transformation by components of the gut microbiota,” the researchers write in the Journal of Nutritional Biochemistry.

“Different studies have been carried out to understand the gut microbiota transformation of particular polyphenol types and identify the microorganisms responsible.”

Even so, despite both polyphenols and gut microbiota being studied extensively, not much is known about their relationship with each other.

» Polyphenols are compounds in food that act as antioxidants and anti-inflammatories.

» An extensive review of the health benefits of polyphenols has shown that their major influence on health is through the gut.

» Eating more polyphenols supports the growth of bacteria in the gut that not only keeps us healthy, but aids the complete metabolism of the polyphenols themselves.

They note that only a small percentage of dietary polyphenols, around 5-10% of total intake, are directly absorbed into the small intestine. The rest are subjected to extensive biotransformations, aided by bacteria in the large intestine, which produce water-soluble by-products known as metabolites that are distributed to organs.

While most research focuses on the polyphenols themselves, the team notes that more study of these metabolites might help us understand more about how polyphenols function in the body.

Previous studies have shown that polyphenols can be converted by colonic bacteria to bioactive compounds that can affect the intestinal ecology and influence host health.

Animal and human studies have both shown that certain doses of selected polyphenols may change the gut microbial composition, which can help some bacterial groups thrive.

Evidence reviewed for instance suggests that a rich source of flavonoids such as onion extracts has an inhibitory effect on pathogenic bacteria such as Streptococcus mutans and Streptococcus sobrinus as well as on Porphyromonas gingivalis and Prevotella intermedia, which are considered to be the main causal bacteria of adult gum disease (periodontitis). The polyphenols in raw cacao have been also been shown to fight the bacteria that cause tooth decay.

The increase in beneficial bacteria seen in the red wine study is important because, of the estimated that 500–1000 different microbial species inhabit the gastrointestinal tract, only a few bacterial species (e.g. Escherichia coli, Bifidobacterium, Lactobacillus, Bacteroides, Eubacterium) are involved in aiding the metabolism of polyphenols have so far been identified.

Evidence also suggests that polyphenols have potential benefits for immunity by reducing concentrations of the plasma C-reactive protein (CRP), which is a blood marker of inflammation.

“It is clear that dietary polyphenols and their metabolites contribute to the maintenance of gut health by the modulation of the gut microbial balance through the stimulation of the growth of beneficial bacteria and the inhibition of pathogen bacteria, exerting prebiotic-like effects,” the team conclude.

Eating a rainbow of foods is the best way to support gut health, and therefore the health of the whole body. [Photo: Bigstock]