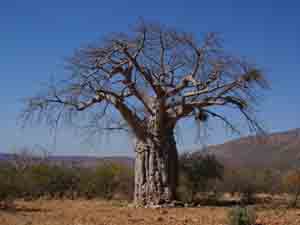 The baobab tree has many traditional uses including for food, medicine and building meterials [Image: Wikimedia Commons]

Baobab – a superfood from the ‘tree of life’

The baobab tree (Adansonia digitata) is native to South Africa, Botswana, Namibia, Mozambique and Zimbabwe, though these days it can be found in most countries within the African continent.

Baobab has many common names including the monkey bread tree, the cream of tartar tree, and the “upside down tree” – a reference to its striking silhouette at sunset which gives the appearance of the tree being uprooted and stood on end.

In fact, there are eight species of baobab tree. In addition to the one in Africa – one of the oldest species of trees on the planet, dating back about 6000 years – there is also one in Australia, six in Madagascar.

The tree produces heavy white flowers that are pollinated by fruit bats at night. These eventually become long green or brownish fruits  that resemble small gourds.

Beneath the hard shell of the fruit is a soft, whitish pulp and kidney-shaped seeds.

The pulp, which is slightly powdery, is a free flowing creamy white powder, that melts in the mouth and has a unique pleasant flavour idea for incorporating into drinks and baked goods.

The baobab fruit is wild harvested by hand by collecting from the trees or from the ground. 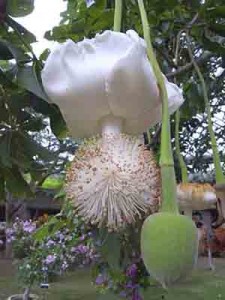 The baobab tree produces showy white flowers and a hard fruit with a soft, powdery and nutritious pulp

In Africa baobab is known as the  Tree of Life. All parts of the tree are used for food, beverages and medicine as well as providing fibre for ropes and mats.

The fruit pulp is used throughout Africa to make ice-cream. In Sudan, a refreshing drink called ‘gubdi’ is made from the  pulp and cold water in order to preserve the fruit’s nutrients.

Nutritional analysis of baobab fruit pulp has shown that it contains may important nutrients.

It’s vitamin C content has been compared with oranges and shown to be at least at least three times higher (150-499 mg/100g vs 46mg/100g). Other studies put the figure higher at around 6 times that of the orange.

The vitamin C in baobab is in an easily assimilated form and acts as a potent antioxidant, protecting our cells from damage by free radicals as well as aiding the absorption of iron and calcium. it is is also important for healthy skin as it helps in the formation of collagen in connective tissue.

Trace element analysis shows that baobab fruit is a good source of calcium with 100g of baobab fruit providing  anywhere from116 to 370 mg (recommended daily intake for calcium is 500 mg/day).

In fact its calcium content it is thought to be one of the main reasons that baobab is consumed by pregnant women and children in Senegal. One 1993 study found that  eating the fruit pulp in season  (December to April) without the seeds once a day, contributed 30 mg/day calcium to the diet.

Overall studies have shown that baobab has:

Although we think of Baobab as being new to the West, reports show that it was brought into the UK in the early 1900 for use in the preparation of tea cakes. During the First World War, the fruit pulp was used as a leaven for baking bread. In the USA there are reports that dispensaries recommended baobab fruit for its medicinal properties from 1860 right up to 1947.

Modern science is confirming some of baobab’s traditional uses.

A 1997 study, for example, compared the efficacy of a local drink, “pain de singe”, made from baobab fruit against the WHO standard solution (composed primarily of salt, sugar, and water) for treating children with acute diarrhoea resulting in mild to moderate dehydration. The results showed that both solutions were equally effective.

A 1994 study showed that baobab fruit had antipyretic (fever-reducing) as well as anti-inflammatory and analgesic properties. The researchers found that whilst it could lower elevated body temperature, normal body temperature is not affected.

The anti-inflammatory properties of baobab could also make it a supportive treatment in inflammatory conditions such as heart disease and diabetes.

Snack food manufacturers are already falling over themselves to incorporate baobab into fruit bars and smoothies. But from a nutritional standpoint using the dried fruit pulp in your own cooking is a better choice.

To try it for yourself use 10-15g (1-2 teaspoons) of baobab fruit powder dissolved in water, fruit juice or a smoothie. Or try sprinkling over cereal or yoghurt. Our Super energy snack recipe also incorporates baobab, along with other sustaining, nutritious superfoods.

The baobab tree has many traditional uses including for food, medicine and building meterials [Image: Wikimedia Commons]